In real terms, the spread is marginally lower as the Brent October contract expires tomorrow. The more active November contract settled at $ 51.66 / barrel.

The effect of Hurricane Harvey has been devastating on the US. In terms of the energy market, what needs to be seen is how soon the shut in capacity comes back on stream.

Vessel traffic into and out of the US Gulf Coast has also largely been closed, with distillate cargoes to NW Europe and the Mediterranean all but halted in the last eight days. Only one vessel has been seen leaving the USGC to land across the Atlantic, while Asian customers expecting Eagle Ford crude delivery in the second half of September also foresee delays of around 1-2 weeks. The ports of Corpus Christi and Houston remained closed on Tuesday, with Corpus Christi hoping for a restart date of September 4.

As of now, the Louisiana Offshore Oil Port (LOOP) is the only open port for movement of both crude and products from the Gulf coast area. Supply of gasoline into the Colonial and other pipelines has been shrinking and there appears to be a very real possibility of shortage of fuel over the coming 2-3 weeks. Gasoline prices rose a further 4% in the US to reflect this reality. However, this rise itself will help curb demand, therefore the impact of this shortage may well be muted. The terribly high stocks in the US are expected to act as a buffer to this expected shortfall.

As per the American Petroleum Institute crude stocks fell by 5.78 Million last week. This is the 9th continuous decline in stocks. However, stocks at Cushing increased by 562 KB.

Stock reports this week (and the next two to three weeks) are not likely to impact the market much as it grapples with the enormity of the impact over the weekend.

The Naphtha crack settled at its highest level in six months (nearly $ 86/ T) as the market still awaits clearer signals about supply and demand in the US. Forward cracks didn’t change much though with the September Naphtha crack being valued at $ 2.60 /bbl

We would continue to recommend hedging of cracks even at these levels. We are maintaining below the graphs we had used of global gasoline stocks for reference, we would not be surprised to see an eventual drop in prices during the course of the month of September as US prices are still to reflect realistic markets rather than a knee jerk reaction. 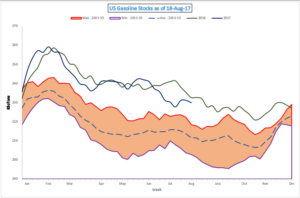 Distillate cracks have also eased as the market may be looking for opportunity to hedge at these levels which have not been seen too frequently in the paper market over the past couple of years.

Fuel Oil cracks strengthened dramatically as the cash market flipped into premium. Having said that, the rise in prices has also increased the East West differential potentially making the arbitrage easier to execute.