The rally has been attributed to the fact that although the decline in crude oil stocks less than expected, it was the tenth in a row, a record streak. The strength of the rally can be judged by the fact that more than 830,000 U.S. crude contracts changed hands, far exceeding the daily average of 618,000 contracts over the last 10 months.

Another possible reason for the rise in crude prices is the weakening of the US dollar. The EUR-USD pair breached 1.24 last night with the dollar index dropping more than 0.7% in the wake of comments by the US Treasury secretary indicating that the US actually preferred the US dollar at these levels. 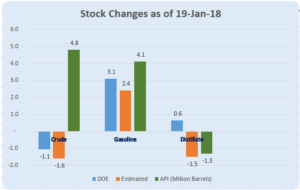 The DOE reported yet another draw of 1.1 million barrels in Crude Oil stocks. While this was less than the consensus expectation of 1.6 million barrels, this was the 10th draw in a row.

Gasoline stocks built by 3.0 million barrels. While this is also a streak of 12 builds in a row, coming in off season, as it were, it is less of a concern.

Distillate stocks also built by 600 KB against the consensus expectation of a draw.

Refining rates have dropped to 90.9% the lowest since the week ended November 3, 2017. That product stocks are building inspite of the lower refinery runs suggests a return to stabilization that was first disrupted by Hurricane Harvey last year.

We present alongside a picture of how stock data, along with gasoline demand has changed in the recent past.

Although some spot demand from Japan, Singapore, Philippines, China and South Korea helped the Asian physical crack to settle higher at $83.40 /MT on Wednesday, fundamentals remained weak as high supplies continue to weigh on the market.

The Asian physical gasoline crack to Brent also settled higher at $ 7.97 /bbl on Wednesday. However akin to naptha, adequate availability is likely to keep the prices in check in the near future.

Demand in the Middle East is now seen as somewhat cooler, with Saudi Arabia’s gasoline demand was heard to have decreased recently, especially for premium grades, since the domestic price hike implemented on January 1

However, the February paper crack has eased further $ 11.70 /bbl.

Distillate cracks have once again posted a gain on the back of falling inventories in the Middle East and cooler than average weather in some parts of Asia which is spurring demand for kerosene used for heating.The Asian distillate market remains well supplied as key suppliers increase exports.

The February paper gasoil crack has once again shrugged off the fundamental situation and has risen to $ 15.30 /bbl The 10 ppm crack is at $ 16.15 /bbl.  The February regrade has reduced further $ 0.20 /bbl.

Current middle distillate levels are relatively high given the recent past. We would recommend hedging the 10 ppm crack for February at current levels as also the Jet crack (currently $ 15.50 / bbl).  The 500 ppm Gasoil crack may be hedged above $ 15.75 /bbl. In addition, we would recommend hedging the 4Q18 and 1Q19 cracks for all three commodities. While 4Q18, 500 ppm Gasoil crack is almost at current levels, we are of the opinion that liquidity in this crack will vanish in the future and therefore, a small hedge is merited.

An active Platts Trading Window coupled with  a fall in inventories in the Middle East has helped the fuel oil cracks to recover from its recent lows.

In the week to January 22, the fuel oil inventories at Fujairah Oil Industry Zone (FOIZ) fell for a second consecutive week to 7.155 million bbls (about 1.07 million tonnes).This is the lowest total recorded for the heavies category since the start of weekly stock reporting in January 2017, and the first instance where heavies were not the largest of the three reported product categories.

The February 180 cst crack is slightly higer at -$ 5.95 /bbl. The visco spread has risen to $ 0.09 / bbl. This is consistent with the rise in gasoil cracks which makes cutter stock expensive.