The rally was apparently in thin volume indicating a speculative charge in the hope of a another significant draw in crude oil stocks. However, the market is seeing some correction in the morning after API reported a build. If confirmed by the DOE, it will be the first build in 10 weeks. As such, this confirmation would have far reaching implications in terms of price corrections.

In our opinion, the entire rise of Brent from $ 57 / bbl to current levels has been event driven, having little to do with the supply situation. Each of the events which provoked the rise has abated, but the premium built into the prices has stayed. We still have the tremendously overbought speculator position of 9 long barrels for every short barrel, so a reversal should be interesting to watch to say the least.

Oil exports from southern Iraq have fallen by 100kbpd this month from a record high, according to shipping data and an industry source, as bad weather curbed shipments. 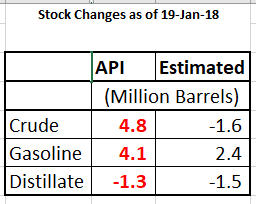 Today’s DOE data will be looked at closely for reassurance that the bullish picture is intact.

An oversupplied market coupled with high inventories across key trading hubs continues to pressurize the Asian physical naphtha crack which plummeted to a five-month low of $ 81.82 /MT on Tuesday.

The February naphtha crack has fallen further to $ 0.25 /bbl today.

The Asian physical gasoline crack settled at a three-session low of $ 7.81 /bbl as the market is growing wary of high supplies in the region. Adding to the supply glut is China whose December gasoline exports at 1.23 million MT was a new record high. In total, China had exported approximately 10.5 million MT of gasoline in 2017, up a noteworthy 8.5 % as compared to 2016

However, the February paper crack has only fallen marginally and is valued at $ 11.90 /bbl.

In other news, India’s oil ministry is pushing for a cut in excise duty on petrol and diesel in the upcoming 2018/19 budget to cushion its vast customer base from the impact of rising oil prices.

The February paper gasoil crack has once again shrugged off the fundamental situation and has risen to $ 15.00 /bbl with the 10 ppm crack at $ 15.85 /bbl. The February regrade has reduced slightly and is valued at $ 0.30 /bbl.

The fuel oil crack continues to suffer as the recent run up in crude prices, which has naturally led to a rise in fuel oil prices, is hurting demand.

The February 180 cst crack is valued lower at -$ 6.10 /bbl. The visco spread has risen to $ 0.85 / bbl as traders expect the market to be slightly short on low viscosity cutter stock in the near term.