In other news, The Louisiana Offshore Oil Port (LOOP), the largest privately owned crude terminal in the United States, completed the first very large crude carrier (VLCC) crude oil loading operation at its deepwater port. This is likely to make export of US Crude far easier.

Nigeria says its crude output is hovering between 1.7-1.8 mb/d, and that the country is still aiming for 2.5 mb/d by the year end. If it manages to increase its output, it will make the ‘rebalancing’ even more difficult.

The DOE, like the API, reported a surprise draw of 1.6 million barrels While gasoline built by 300 kb, distillate stocks drew by 2.4 million barrels. 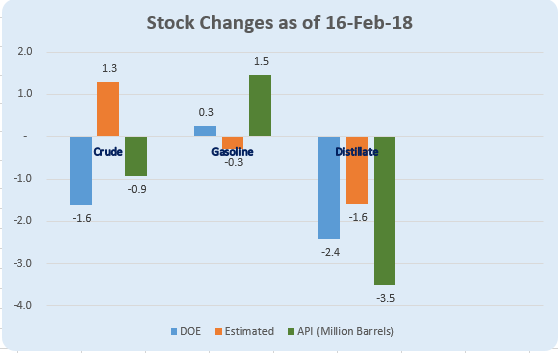 Refinery runs dropped to 88.1% in keeping with the seasonal trend.

Crude imports fell to just above 7 mb/ d. This is a consequence of disruptions in Canadian imports. Net crude imports for the month were just under 5 mb/ d, the lowest on record. Crude exports of 2.1 mb/ d were also close to the record level of 2.1 mb /d a few months ago.

Asia’s naphtha crack slipped to a 1-1/2-week low of $68.78 a tonne, weighed down by high Brent crude prices at above $64 a barrel. But naphtha fundamentals have improved this week for sellers as supplies were not as plentiful as before.

Asia’s gasoline crack edged up 3 cents to $7.57 a barrel. Singapore’s onshore light distillates, which comprise mostly of gasoline and blending components, fell by 791,000 barrels, to a three-week low of 13.33 million barrels in the week to Feb. 21.

Asia’s jet fuel crack rose to more than $16 a barrel on Thursday, its highest in more than 2-1/2 weeks as tight supplies persisted. Cash deals in the Singapore market have been absent for more than a week because of a lack of offers.

We recommend adding to our Hedge of the regrade at this level.

Asia’s front-month high-sulphur fuel oil crack narrowed its discount to Brent crude on Thursday, edging away from a near-two-week low in the previous session as official data showed Singapore fuel oil inventories at a five-week low. The March 180-cst fuel oil crack to Brent crude was trading at about minus $7.04 a barrel by the end of Asia trading hours, up from a two-week low of minus $7.30 in the previous session.

Singapore weekly onshore fuel oil inventories fell 6 percent to a five-week low of 21.431 million barrels in the week to Feb. 20