Oil prices finished higher on Friday to score their second consecutive weekly gain, amid growing optimism that rebalancing in crude markets are well underway thanks to OPEC-led production cuts. Brent futures once again settled close to a dollar (92 cents) higher at $ 67.32 /bbl.  WTI gained 78 cents to settle at $ 63.55.

For the week, WTI crude rose nearly 3%, while Brent added about 3.8%, as both continue to claw back ground lost in a selloff earlier this month.

Sentiment was boosted after Saudi Arabia’s energy minister Khalid al-Falih said it was clear oil markets are rebalancing, and added that he expects inventories to continue to decline in 2018.

The number of oil rigs being deployed continued to rise, albeit by just 1 rig this week. The count has risen by 52 oil rigs in the last five weeks, putting the total at a nearly three-year high of 799.

In other news, the U.S. on Friday announced fresh sanctions aimed at curbing the illegal trade of petroleum products, coal, and other goods with North Korea on. These sanctions are targeted at the North Korean shipping industry, and are aimed at 27 entities and 28 vessels across nine jurisdictions, including China, Singapore and Hong Kong. 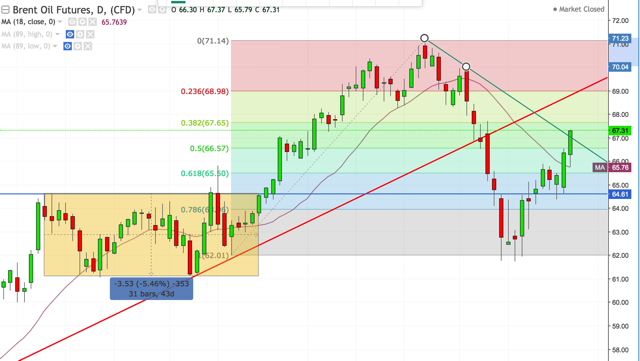 With effect from today, the May 18 contract becomes the active contract (though the April contract only expires on 28-Feb-18).

The pullback extends to the 2nd week, taking out the short stops at 65.30 on Thursday. Brent is on the verge of testing the strength of the 3 week old break down at 67.10. We are back at that level after 3 weeks. Now that the resistance levels at 65.20 have been surmounted, upside to 69-70 area becomes a possibility.

While the larger trend is still down with the gains over the last 2 weeks seen as a pullback, the short-term market shows enough strength for tradable upsides.

Trade for the week is to take longs  around 66.50-66.90, for upside targets in the 69-70 range. Stops are currently under 65.30. Caution dictates that we confirm a follow-through to Friday’s buying, else wait for to trade  down to your supports.

Immediate resistances are at 67.50- 67.70. While they are relatively minor, they are important to confirm further strength.

Immediate supports are at Friday’s early lows of 65.80. A small cluster of ranged priced action supports lie in wait to hold up short term dips. Supports at 64-64.50 are much stronger

The physcial Asian naphtha crack gained 80 cents on Friday to reach a four-session high of $ 69.58 /MT even as fundamentals remained unchanged. Adding to the suppliers woes is the fact that key buyers like Formosa Petrochemical Corp are replacing some of their naphtha feedstock with cheaper LPG.

The March crack is valued unchanged today at -$ 0.15 /bbl

High inventories pressurized the physical Asian gasoline crack to settle at a five week low of $ 7.16 /bbl on Friday. In the week to February 22, gasoline stocks independently held in the Amsterdam-Rotterdam-Antwerp (ARA) hub reached a 19-month high of 1.34 million MT . Likewise, gasoline stocks  in the United States rose 261,000 bbls.  Adding further pressure to the market is China whose January gasoline exports soared by two thirds to 1 million MT from a year ago.

The March 92 Ron gasoline crack however is valued higher this morning at $ 11.25 /bbl

Jet fuel continues to dominate the Asian distillate story with strong demand and limited supplies pushing up premiums. On Friday, the jet fuel crack continued to hold above the $ 16 /bbl level for a second consecutive day.

In the Platts Trading Window, jet fuel deals resumed after a gap of nearly two weeks with deals being struck at high premiums.

In sharp contrast to the Singapore weekly onshore inventories, trading and storage hubs of ARA and Fujairah reported a steep increase in inventories last week which had a bearish impact on fuel oil cracks. In the week to February 22, fuel oil stocks in the ARA hub jumped 18 % to a four-week high of 1.012 million MT . ARA fuel oil inventories are now 22 % higher than a year ago and slightly above the five-year average for this time of the year. Similarly, fuel oil stocks in the Fujairah storage hub rose 14 % to a two-week high of about 0.905 million MT in the week to February 19.