In other news,  Ineos says the Forties pipeline is expected to restart in early January after repairs over Christmas. The company will allow a small number of customers to send oil and gas over the pipe

lines before carefully ramping flows back to a normal rate by early next year.

Saudi Arabia’s King Salman and Russian President Putin held a telephone conversation on Thursday and agreed on the need for continued cooperation to maintain energy market stability. The two parties also discussed the recent Yemen missile attack on Riyadh, which Putin condemned, and stressed the need to achieve a political settlement in Syria.

The physical Asian naphtha crack continued to regain strength, settling yesterday at $116.35 /MT. Demand continues to remain strong as alternate feedstocks are either not available or too expensive.

The January Naphtha crack is higher at $ 3.55 /bbl 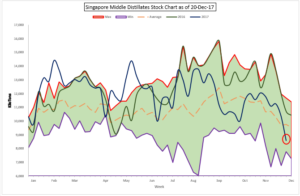 The front month time spread for the 180 cSt grade flipped into contango yesterday as demand for the product seems to have eased out. Singapore weekly onshore fuel oil inventories fell 2.5 percent, or 583,000 barrels (about 87,000 tonnes), to an 11-week low of 22.631 million barrels (3.38 million tonnes) in the week ended Dec. 20.