WTI has been finding strength on the back of falling crude inventories in the U.S. which at 436.5 million bbls, are now at their lowest since October 2015. As regards Brent, continued outage of the Forties pipeline which carries around 450,000 bbls per day of Forties crude to Britain, along with a third of the UK’s total offshore natural gas output, is helping to prop up prices. As per the latest available information, Ineos, the Operator of this pipeline, is awaiting custom parts to fix Forties oil pipeline. 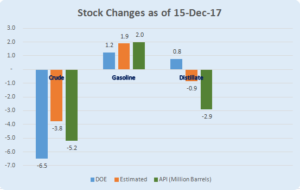 The January Naphtha crack has however remained unchanged at $ 3.40 /bbl

In contrast to the naphtha crack, the physical Asian gasoline crack fell 30 cents from the previous day to settle at $9.05 /bbl, the lowest since 5 July 5 2017.

Distillate cracks have weakened slightly as traders are turning bearish on Jet Fuel in particular amid expectation of slow demand and increased production from refiners in China and India.

Fuel oil cracks have lost ground amidst expectations of surplus near-term supplies. Total fuel oil flows into East Asia for this month are expected to close at a 10-month high of about 7 million MT, above November’s 6.2-6.3 million MT