Markets are still torn between the increase in shale production and the stoppage of the Forties pipeline. That news of the Yemeni missile did not spook the markets much is because of the premium already built into oil prices for various reasons. There appear to be other considerations limiting the addition of positions for now.

The latest update from Ineos says that the timeline on Forties pipeline repair has not changed. The company is still estimating 2-4 weeks of down time starting Dec 11 while examining 3 repair options.  Similarly, in North America, TransCanada’s request to amend its route application of Keystone XL pipeline was denied by the state regulators in Nebraska. This could potentially be a major setback that will prolong the timeline of project completion, during a period that pipeline capacity is sorely needed to ease the heavy discount in Canadian crudes. 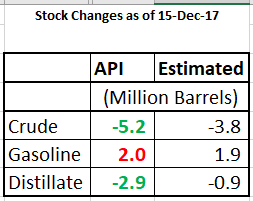 As such, the data appears bullish in terms of market expectations as even the build in gasoline is only marginally higher than expected. However, stocks in Cushing increased after many weeks of successive draws suggesting that the impact of the Keystone pipeline shut down is finally coming to an end.

As usual, markets will be looking to the official data released by the DOE later today for confirmation.

The Asian naphtha crack recovered slightly yesterday to settle at $112.88  / MT yesterday. Demand for the material is ample. However, supply from Saudi Arabia could be higher this month.

The Asian gasoline crack does not seem to have been affected by the build reported by the API. The January crack is valued at $ 12.00 /bbl.

Firm prompt demand lifted Asia’s front-month 500ppm gasoil margin higher on Tuesday, elevating it away from a near two-week low hit in the previous session. Gasoil demand in China is likely benefiting from a knock-on effect from severe natural gas shortages in the country according to JBC Energy.

The 180 cst crack has again leapt up to -$ 2.80 /bbl with the visco spread unchanged at $ 0.65 /bbl. Refiners may like to start hedging the crack at these or slightly better levels.