Oil prices climbed to their highest level in three weeks on Tuesday as tension in the Middle East and the possibility of further falls in Venezuelan output helped offset the impact of growing U.S. crude production. Brent crude  futures for May delivery rose $1.37 to $67.42 / bbl. The May U.S. crude futures  rose $1.41 to settle at $63.54 /bbl. The WTI April future expired yesterday at $63.40

Saudi Arabia add fuel to the already flaming 2015 deal between world powers and Iran calling it ‘flawed agreement’on the eve of a meeting between Crown Prince Mohammed bin Salman and President Trump. Trump has been vociferously calling for the cancellation of the deal.

A small doubt rises in our minds whether the world will follow the US lead as aggressively as it did previously following Trump trampling over all economic accords. That may well be the reason why this has not been implemented for the last two months.

Venezuela’s oil production fell to just 1.548 million bpd in last month—a 52,400 barrel per day drop from January 2018. Most people expect the drop in production to accelerate as the economic crisis in Venezuela prevents it from investing funds to shore up drilling as much of the oil that Venezuela does manage to produce is sent on to creditors—most notably Russia and China. 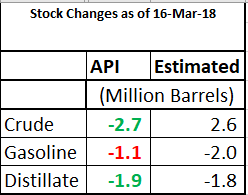 If confirmed by the DOE, this could well see previous highs of $ 70 being tested.

The draw in Gasoline was less than expected while that in distillates was more or less in line with expectations.

Naphtha cash premiums appeared to have eased off considerably.  YNCC, a Korean processor, purchased 75 KT of 1st half May delivery cargoes at premiums of about $ 6/5/ MT over marker quotes CIF Japan.

Asia’s gasoline crack settled significantly lower at $ 7.44/bbl yesterdayweighed down by high supplies in the West and firm oil prices. Several more tankers have been booked in recent days to store gasoline off Europe’s coast as supplies in the region rise.  The traders behind the floaters were Litasco, Trafigura and Gunvor, according to sources.

Cash differentials of Asian jet fuel cargoes remained unchanged on Tuesday following a slight uptick in the previous session, but continued to hover near two-month lows as seasonal heating demand faded in Japan and South Korea, helping to replenish supplies. Jet fuel cash premiums were unchanged at 21 cents a barrel to Singapore quotes, compared with 19 cents on Friday, which were the lowest in nearly two months . The cash differential of Asia’s 10ppm gasoil  stood at 28 cents a barrel to Singapore quotes. While market participants expect bearish sentiment to weigh further on the jet fuel market over the near term, the market would remain supported over the next couple of months due to summer travelling demand for the aviation fuel. Middle distillate prices would also get support from supply constraints stemming from a ramp up in scheduled refinery maintenance in Asia.

In a rare shipment, a diesel cargo will be loaded into a very large crude carrier (VLCC) from a refinery at China’s Tianjin port next month before heading to Europe or West Africa. 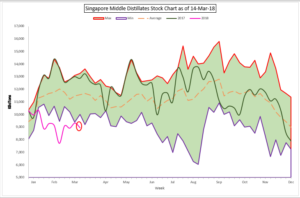 This would indicate a move to keep stocks in Asia suppressed. With Singapore stocks currently lying at 2.6 million barrels below the 5 year average and at their lowest levels for this time of the year, it is difficult to envisage a scenario under which a reverse arbitrage would work.

Asia’s 380-cst cash differential rebounded on Tuesday from a one-year low touched in the previous session, as buying interest for physical cargoes of the fuel returned to the Singapore trading window. While no trades took place, there were 12 bids against 13 offers yesterday (as compared to 0 versus 13 on Monday).

A fire that had broken out at an oil storage tank at Tankstore’s Pulau Busing terminal in Singapore on Tuesday evening has been extinguished, the Singapore Civil Defence Force (SCDF) said on Wednesday. The cause of the fire is not yet known and is under investigation, an SCDF spokesman told Reuters on Wednesday.

We have reached our target levels in the Fuel Oil Crack for 3Q 2018.