Oil hit a six-week high on Wednesday, closing in on a 3-year peak set in late January, on a surprise decline in U.S. inventories, strong compliance on OPEC production cuts, and persistent concern related to the Iran nuclear deal. Brent crude  rose $ 2.05 to $69.47 / bbl. WTI futures  rose $ 1.63 to settle at $ 65.17 /bbl, their highest price since Feb 2.

Crude prices were also lifted by a slump in the USD index which values the dollar against a basket of currencies.  This slump has apparently come due to a interest rate hike in the US. This drop is counterintuitive as a rate hike usually works towards strengthening a currency.

The data published by the DOE showed a surprise drop in crude stocks by 2.6 million barrels to 428.31 million. Given expectations of a build, this single statistic spooked the markets into climbing over $2/bbl in Brent prices 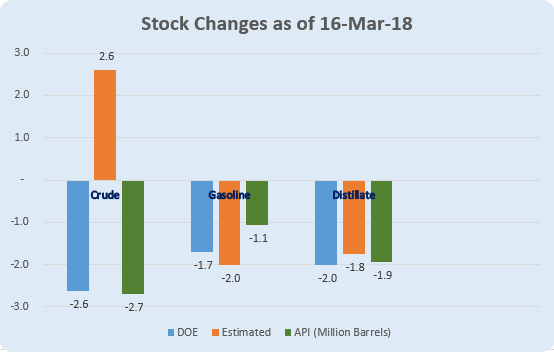 The draw in Gasoline was less than expected while that in distillates was more or less in line with expectations. Both, the API as well as the DOE returned fairly similar figures this week. 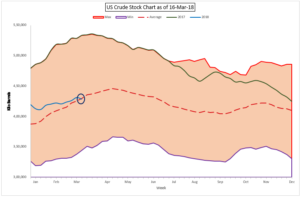 This latest draw in crude stocks has pulled them below the five year average (2013-17).

The drop in crude stocks is attributable to a drop in crude imports by 500 kbp/d as well as an increase in run rates by another 400 kb/d. However, an analysis of the material balance shows an imbalance between crude used and products produced for the second week in a row.

The material balance analysis also suggests that both gasoline as well as distillate stocks should have built rather than drawn. Gasoline demand dropped significantly by 318 kb/d to a more regular level of around 9.3 mb/d.

Asia’s naphtha open-specification front-month price for first-half May was $8.50 a tonne higher than that for first-half June, making this the widest inter-month spread since Jan. 11, due to tighter supplies. Fewer cargoes arriving in Asia this month from the West including Europe, was a key reason behind the tighter supplies. Although more cargoes could be arriving in Asia in April from the West versus March at some 1 million tonnes, the increase in volumes may not be significant

Asia’s gasoline crack recovered marginally to settle at $ 7.55/bbl yesterday. This brings the average for March 1-21 to about $8 a barrel versus $8.70 for the same period last year.  Recent outages in Taiwan’s CPC refineries failed to affect the market due to ample supplies, especially in Europe where traders were storing gasoline onboard vessels.

Iranian gasoline imports have dropped sharply in recent weeks due to starting up the second phase of the Persian Gulf Star Refinery, according to a Reuters report. The report estimates that imports of gasoline will drop to around 70 KT in March, compared to 120 KT in the last two months and 300 KT in December 2017.

Jet fuel cash premiums  rose to 32 cents a barrel to Singapore quotes, compared with 21 cents on Tuesday. Market participants expect the aviation fuel market to stay well supported at least until May, on the back of heavy refinery maintenance across Asia.

The cash differential of Asia’s 10ppm gasoil  were at 26 cents a barrel to Singapore quotes, down slightly from 28 cents on Tuesday.

Asia’s front-month high-sulphur fuel oil crack widened its discount to Brent crude on Wednesday, slipping to a near two-month low amid rising crude prices and firm supplies of the fuel in key storage hubs. The April 180-cst fuel oil crack to Brent settled at minus $8.69 a barrel on Wednesday, its widest discount since Jan. 24.  This came amid rising oil prices on Wednesday which were lifted by tensions in the Middle East and healthy demand.

The falling down of the Fuel Oil cracks has resulted in our meeting our target for the whole strip.

Gasoil continues to be strong, taking jet along with it. This often brings us to the question: “Should we hedge more at these levels when the market is headed higher?”. There is no right answer to the question. However, a hedging program should essentially not be calling the market. Today, we are recommending adding to our Jet hedge for Cal-19 at $ 18.25 /bbl.  This level has only been reached 10% of the times in the last five years. i.e. this is truly an exceptional level and one would recommend locking a little margin at such levels.