Oil prices jumped on Friday as traders focused on possible disruption in supplies due to political tension in the Arab Gulf. Brent futures rose $1.09 to settle at $66.21 /bbl. WTI gained $1.15 to settle at $62.34/bbl. The WTI crude future for April expires tomorrow.

Remarks on Thursday by Saudi Arabia’s Crown Prince Mohammed bin Salman added to geopolitical tensions after he warned that his country would seek to develop a nuclear bomb if Iran did.

The fate of Iran’s nuclear deal looks grim with the incumbent Secretary of State, Mike Pompeo well aligned with President Trump on its scrapping.

On the bearish side, the number of active rigs climbed back to 800 as per the Baker Hughes weekly report.

Hedge funds and other money managers cut their bullish bets on U.S. crude oil futures and options in the week to March 13, as crude prices fell for a second week.  The speculator group cut its combined futures and options position in New York and London by 24,667 contracts to 453,864 during the period. The cuts marked the second consecutive week in which speculators cut their net long positions in the market. 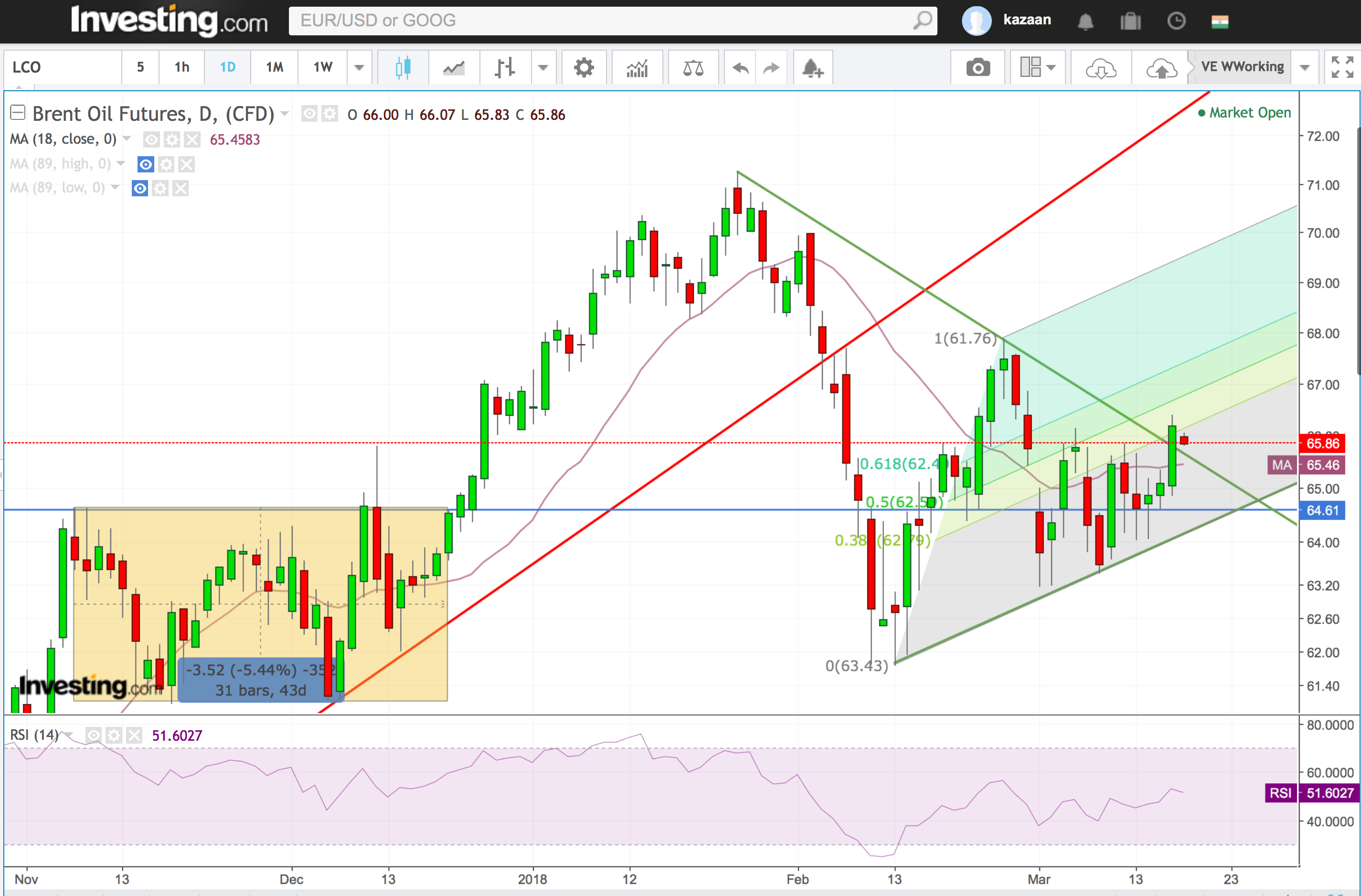 After trading for the whole week in a narrow band, Brent broke out on Friday from a a narrowing range of reducing amplitude to close at 66.21. This 12 day high gives us the first signal of a move to the upside.

Ideally we should wait to see the move follow-through to take a long trading view. This comes with a close above 66.50. This follow-through in buying to Friday’s move is important to confirm, as in the 12 days past, the previous 2 attempts at 66+ have failed. Also the latest move is not backed by expanding momentum..

Asia’s naphtha crack eased on Friday to $84.60 /MT. While demand is expected to be strong going forward, the easing was attributed to most buyers having completed their purchases for the second half of April. This week will probably give more definition to the future of the crack.

Asia’s gasoline crack edged up 14 cents to $7.88 /bbl but supplies in both Singapore and Europe were seen high. Gasoline stocks in the ARA hub  rose to 1,309 KT last week. The weak fundamentals have even prompted at least three 90,000 tonne tankers being booked in recent weeks to store gasoline for up to 60 days off the Dutch coasts, according to traders and shipping data.

The downtrend in Asia jet fuel market continued on Friday with cash premiums slipping for a sixth consecutive session and the front-month time spreads of the fuel narrowing their backwardated structure.  Lower deal values on Friday pulled jet fuel cash premiums 19 cents a barrel to Singapore quotes, down from 34 cents in the previous session and its lowest since Jan. 26.

ARA fuel oil stocks plummeted by 364 KT to 725 KT, largely attributed to the movement of stocks to Singapore.