Oil prices had a surprisingly muted reaction to what was apparently bullish data released by the DOE. Brent futures settled 7 cents lower at $69.31 /bbl while WTI eased 2 cents to $63.95 per barrel.

The reaction was even more surprising since Cushing reported the largest draw down since 2004. 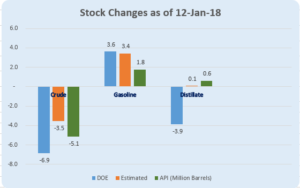 The DOE reported a draw of 6.8million barrels in its weekly report published yesterday.  Not only was this higher that the expectation of 3.5 million barrels, but also higher than the API reported figure.

Stocks at Cushing dropped by 4.2 million barrels.  This Cushing move is in line with ‘disappointing’ production figures showing the recent disruptions of US domestic production were severe and are not really over. On the brighter side, domestic crude oil production returned to 9.75 mb/d.

Although the Asian physical naphtha crack settled at a six-day high of $ 92.32 /MT on Thursday, sentiments continue to be bearish on expectations of high volumes of naphtha coming to Asia from the West and improving economic feasibility of using LPG as an alternate feedstock to naphtha.

The naphtha crack which had slipped below $ 1.00 /bbl last week has managed to climb back up today and is valued at $ 1.15 /bbl for February

The Asian physical gasoline crack also increased on Thursday settling at a five-day high of $ 7.66 /bbl arguably supported by the drawdown in Singapore’s onshore light distillates which fell 3.2 % or 442,000 bbls to a three-week low of 13.55 million bbls in the week to 17 January 2018. This fall notwithstanding, inventories remain well over the five year average and towards the upper end of the range. 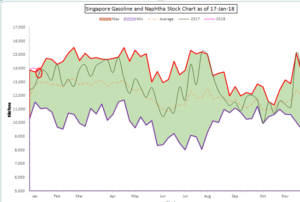 Distillate cracks continue to be valued higher even as inventories rose in Singapore with traders expecting gasoil demand in China to be subdued with the upcoming Chinese New Year. Singapore onshore middle distillate stocks rose 3.5 % to a five-week high of 10.331 million bbls in the week to 17 January 2018.

The fuel oil cracks are valued higher for a third straight day as some additional spot demand helped prop up the market.