Oil prices ended higher on Wednesday ahead of the release of API data that was expected to show a ninth straight weekly draw down in crude inventories. Brent futures settled 23 cents higher at $69.38 a barrel while WTI crude gained 24 cents to $63.97 per barrel. .

The API did not disappoint speculators with another large draw in crude.  In the meanwhile, Kuwait’s energy minister said that OPEC had no plans to discuss an exit strategy when it meets in Muscat.

Compliance with the production cuts is reported to be of the level of 106% for 2017. The level of compliance for December was of the order of 125% according to the minister.

On the bearish side, a report released by the EIA (Drilling Productivity Report) says that US oil production would rise by  1.8 mb/d in 2018. Current levels of production are between 9.5 and 9.7 mb / d.

Today the OPEC is expected to publish its monthly report. This is in addition to the official US statistics to be published by the DOE 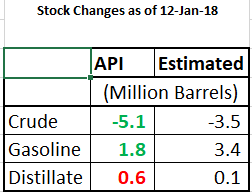 This is the ninth straight draw in US stocks. If such a draw is corroborated by the DOE, we are likely to see a retest of $ 70 / bbl levels in Brent.

As of last week, naphtha open-specification price could not match the hike in oil prices and were traded at discounts to Brent for the first time in many months.

Asia’s gasoline crack to Brent continued its recovery, settling at  $7.27 /bbl. However, the impact of increasing inventories is yet to be seen.

Asia’s 500ppm grade gasoil February cash differential to Singapore quotes stayed at a discount on Wednesday due to ample supplies. The coming Lunar New Year next month could lead to a fall in gasoil demand in China as the fuel is used for commercial and heavy vehicles

The discount in Asia’s front-month 380-cst fuel oil time spread was trading at its widest since early-August on Wednesday as concerns of limited spot demand and ample prompt supplies of the fuel continued to weigh on market sentiment.

With just over 6 million tonnes notionally assessed so far, total fuel oil flows into East Asia for January are expected to close lower than December’s 10-month high of about 6.7 million tonnes, amid lower than the usual Western and intra-Asia arrivals. Middle Eastern inflows, however, are expected to be as high as they have been in three of the past four months, with already over 2 million tonnes notionally assessed amid the ongoing lack of demand from Pakistan and above-average exports from Abu Dhabi, Iraq and Iran.