Oil prices managed to close higher on Wednesday after choppy trade earlier in the day due to mixed DOE weekly inventory data which saw a higher than anticipated build in U.S. crude inventories being offset by large distillate and gasoline inventory draws. Both Brent and WTI settled 25 cents higher at $ 64.89 /bbl and $ 60.96 /bbl respectively.

Exerting pressure on crude prices was the latest announcement by the OPEC cartel of an increase in its forecasts for non-OPEC supply growth in 2018 to 1.66 million bbls/day (versus 1.4 million bbls/day previously). Notably, OPEC’s estimates now suggests that oil supply growth will outpace demand growth this year.

The weekly report of stocks and supplies gave out mixed signals. While crude stocks built considerably, product stocks drew despite an increase in refinery runs from 88% to 90%. Stocks at Cushing built for the first time in 11 weeks. The total volume of supplied products (implied demand) rose by 20.9 million barrels week on week, a 7 year seasonal high! 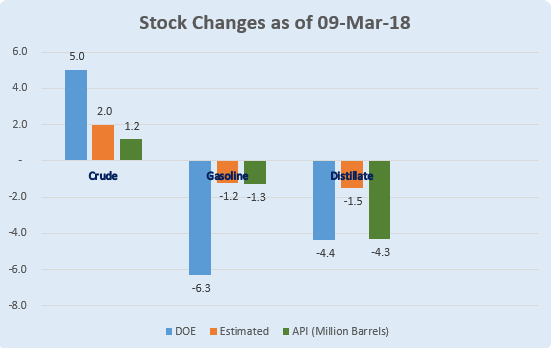 The draw in diesel stocks can largely be explained by a huge increase in exports as we will show in our material balance statement below. Gasoline demand increased to 9.6 million barrels per day, the highest for this time of the year for the past 10 years at least. This could be a natural result of rapidly growing economy as other US data seems to be showing.

Notwithstanding the above, the material balance analysis seems to throw up a lot of questions.

According to the data provided, crude input into production grew by 432 kbpd. However, total products actually declined by around 200 kbpd. This anomaly is difficult to understand. Similarly, gasoline figures seem to be more or less balanced which makes a draw of 6.2 million barrels puzzling. Last, but not least, crude utilization would indicate a huge draw whereas what is reported is a huge build.

Asia’s physical naphtha crack climbed almost 12% to settle at $ 84.03 /MT (the highest since March 5) on Wednesday as demand was seen to be picking up with buyers returning to the market. South Korea’s Lotte Chemical and Taiwan’s Formosa were among those seeking second half April cargoes.

Asia’s physical gasoline crack resumed its downward trend on Wednesday (after a temporary recovery earlier on Tuesday) falling 3.2 % to $ 7.37 /bbl, the lowest since February 23.  Surplus supplies and lackluster demand are keeping prices under pressure.

The Asian cash premium for the 10 ppm gasoil grade extended gains for a seventh straight day, edging up 4 cents to 26 cents a barrel to Singapore benchmark price on Wednesday. Between March 1 and 14, a total of more than 6.3 million bbls of gasoil changed hands, of which trading company Winson sold more than 40 % of the traded volumes.

In other news, middle distillates inventories in the Fujairah Oil Industry Zone (FOIZ) fell by a considerable 25 % from a week ago to a seven-week low of 1.919 million bbls in the week ended March 12.

Asia’s prompt-month viscosity spread extended its losses on Wednesday slipping further away from Monday’s 10-month high. The March viscosity spread, the price differential between March 180-cst and 380-cst fuel oil swaps, settled at $7.75 /MT on Wednesday, down from $8.25 /MT on Tuesday and a multi-month high of $8.50 /MT on Monday.