U.S. shale output will climb by 131,000 barrels per day next month to hit 6.954 million barrels per day according to a new report by the Energy Information Administration. The Permian Basin, in New Mexico and Texas, will see the biggest climb, the data shows. The basin, which has developed itself as the ground zero of the next shale boom, will see an 80,000-bpd jump in production. Texas’ Eagle Ford basin, as well North Dakota’s Bakken and Nebraska’s Niobrara basins will also see sizeable jumps, totaling 47,000 barrels per day.

The front contract of WTI has flipped into contango yesterday, the first tell tale sign of weakness in demand.

Libyan workers have ended their strike at the Zawiya oil terminal and will allow vessels to dock at the port again. The strike had no impact on upstream production. Libya would have had to scale back production if the strike had carried on a few more days due to limited storage facilities at the terminal.

Rex Tillerson’s proposed replacement, the CIA Director Mike Pompeo is known to be a hawk on Iran sanctions. The move could therefore lead to some turbulence in the markets. 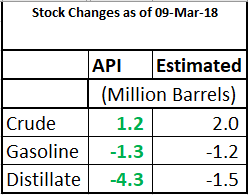 Crude stocks at Cushing continued to fall, this week by 156 KB.

The market will look to the DOE for confirmation of this data as usual.

Asia’s naphtha crack hit a two-week low of $75.20/ MT on Monday with little fresh news to move traders either way.

The March crack, though, has climbed up to $ 0.70 /bbl. The April crack has flipped back into positive territory at $ 0.05 /bbl

Asia’s gasoline crack recovered after eight straight sessions of losses to $7.61 a barrel. A fire at Taiwan’s CPC 350 kbpd Taoyuan refinery over the weekend is expected to disrupt gasoline production. The intensity of the impact on gasoline would, however, depend on how fast CPC is able to restore normal runs. At present, the impact is not extensive due to ample supplies.

Asia’s cash premium for the 10 ppm gasoil grade edged up 2 cents to 22 cents to Singapore benchmark price on Tuesday, the highest since Feb. 5, supported by buoyant cash deals. Trader Winson Oil continued its spree and sold one of four gasoil cargoes in the Singapore cash market, making it the dominant seller since early March. Between March 1 and 13, a total of more than 5.7 million barrels of gasoil changed hands, of which Winson sold more than 40 percent of the traded volumes.