Also helping sentiment was US President Donald Trump’s comments that tariff exemptions would be granted for “real friends”, easing concerns that a full-blown trade war may soon emerge. In addition to Canada and Mexico, President Trump now says he is working on a deal to exempt Australia from tariffs as well.

Improved appetite for risk-sensitive assets was also helped by news of a potential U.S.-North Korea meeting.

The continued shut down of Libya’s El Feel oil field which supplies 70 KB /day was another cause for concertn.

The last significant booster came late on Friday as traders cheered data showing the number of U.S. oil rigs fell by 4 (t0 796) for the first time in seven weeks suggesting that US production may be capped eventually.

For the week Brent gained 1.7% and WTI 1.3% as Friday’s price action wiped out any losses during the middle of the week.

Since the bearish reversal of the tradable trend almost a month ago ( the 6th Feb close @ 66.86) Brent has fallen, pulled back and fallen once again. The benefit of hindsight now shows

Notice that prices have pierced below the consolidation of Nov-Dec’17 / 61-64, that defined the previous up trend, but have not completely broken down. Prices are back at pre break out levels.

As of now, the trend bias still down with confirmation below 62.80 for downsides to 58.

However, the volatility of markets ensured that our earlier two weekly trades were both stopped out- both on the way to play the breakdown and on the way up to play the pull back.

As things stand now, Brent is moving within an increasingly narrow range, current defined by the 63-66 range. The range is wide by some standards, but it is best if a directional view is only taken outside this range.

From a slightly larger perspective- the 61-80/67.90 range marking the first oscillation since the break of the uptrend last month, form the outer range for fresh directional confirmation.

Asia’s naphtha crack fell to $79.48 / MT on Friday, the lowest since Feb. 27 as supplies appeared to be easing. 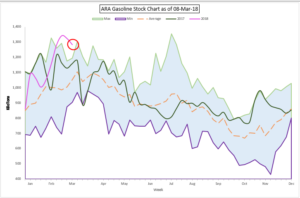 Asia’s gasoline crack to Brent continued its dropping streak to settle marginally lower at $ 7.76/bbl yesterday as supplies appear ample throughout the globe.

While Light Distillate stocks in ARA fell marginally to 1.28 million tonnes, this is still 11% higher than a year ago.

Asia’s jet fuel market extended losses on Friday and ended the week lower amid slowing seasonal demand. Further losses are possible as demand for heating fades with the passing of winter cold. Strong demand and tight supplies since the start of 2018 had boosted jet fuel cash differentials  and time spreads  to multi-year highs by February.

Gasoil stocks held in the Amsterdam-Rotterdam-Antwerp (ARA) storage and refining hub climbed 4 percent in the week to Thursday despite rising demand for distillates following a cold snap across Europe that had sapped inland stocks. Gasoil stocks stood at 3.021 million tonnes, up from 2.906 million tonnes in the previous week.

Buying interest lifted Asia’s 380-cst fuel oil prompt-month and front-month time spreads to multi-week highs on Friday. The 380-cst fuel oil balance-of-March/April time spread was trading at a premium of $1 a tonne at the end of Asian trading hours, its widest premium since Feb. 15 and up from a premium of 75 cents per tonne in the previous session.  Meanwhile, continued weakness in crude oil prices helped narrow the April 180-cst fuel oil crack discount to Brent crude to its narrowest in more-than two weeks.

Fuel oil stocks in the ARA oil hub jumped 41 percent from the previous week to an 11-week high of 1.089 million tonnes in the week ended March 8. The 314,000 tonne increase in ARA fuel oil inventories over the past week is the largest weekly increase since the week to June 15 when they grew by 380,000 tonnes.

Global executives and traders are bracing for higher volatility in fuel markets as they expect refiners to process more light crude oil in the lead-up to new rules aimed at slashing the use of dirty high-sulphur fuel oil in global shipping. The IMO rule changes will likely prompt refiners to boost processing of sweeter crude grades because they produce cleaner, low-sulfur fuels.