Asia’s naphtha crack recovered yesterday to settle at $ 83.05 / MT.  Demand continued to be strong with purchasers from Malaysia joining the string of South Korean buyers.

The March crack has is marginally higher at $ 1.30 /bbl

Asia’s gasoline crack to Brent further weakened for the sixth day in a row to settle at $ 7.76/bbl yesterday. 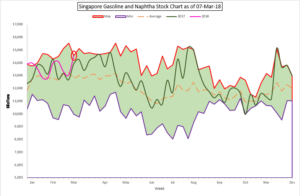 in Singapore rose by 1.4 million barrels to reach 14.58 million barrels, their highest level for this time of the year and levels not seen since August 2017.

This was also just marginally shy of the record 15.5 million barrels of stocks reported in March 2016.

Unusually strong demand for gasoil with 10 ppm sulphur content in the Singapore cash market has pushed the cash premium to Singapore benchmark price higher on Thursday. Nine gasoil deals on 10ppm grade totalling more than 1.4 million barrels were traded on Thursday, making this the largest volume traded in a single session this year.  Trader Winson was the dominant seller of the 10ppm cargoes while BP was the dominant buyer, but the reason behind the spree was unclear.

But apart from the vibrant cash deals, gasoil supplies were still high. This was reflected in Singapore’s middle distillates stock levels where inventories were at a seven-week high of 9.333 million barrels in the week to March 7

Cash differentials of Asia’s 380-cst high sulphur fuel oil extended gains for a fourth straight session on Thursday, lifted slightly higher by buying interest for physical cargoes of the fuel. Singapore weekly onshore fuel oil inventories slipped 499 kb to 22.03 million barrels in the week ended March 7. The lower Singapore fuel oil stocks came amid a 76 percent drop in net imports of the fuel into the city-state from the week before to a seven-week low of 279,000 tonnes.