Oil prices crashed yesterday, once again for reasons that do not have much to do with supply demand fundamentals. Brent futures dropped  $ 1.45 to settle at $ 64.34 /bbl.  WTI also fell by the same quantum settle at $ 61.15 /bbl.

On the day of the week when oil prices react most to data released by the DOE, that data was in general very close to market expectation and may have had little impact. The market reacted more to the resignation of Gary Cohn, an advisor to Donald Trump. This move sent stock markets in the US tumbling and other markets followed in its wake as Trump’s determination to go ahead with import tariffs is being seen as a possible trigger for a trade war. 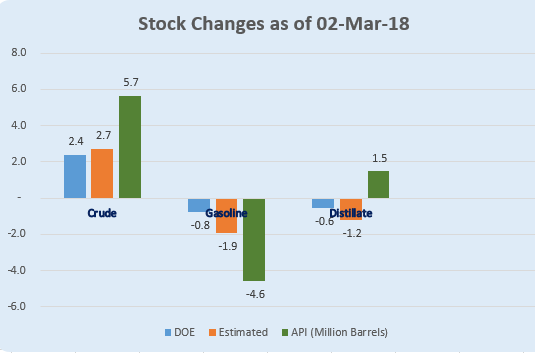 In general, this week’s data has  been remarkably close to market expectations though not necessarily on the same side. While crude stocks built less than expected, product stocks also drew less than expected. 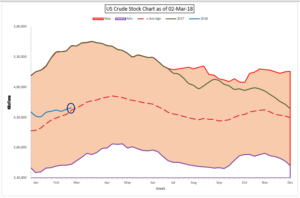 It must be noted that crude oil stocks are just 4 million barrels above the five year average. Therefore, unless we see a series of huge builds in the next several weeks, we have to say that OPEC has achieved its objective of bringing crude stocks to five year average levels.

Gasoline stocks appear to be more or less comfortable. With the expectation of gasoline season demand, it may be heartening to note that gasoline stocks, at 251 million barrels, are marginally higher than previous year levels (249 million bbl).

Distillate stocks are also hovering just above the 5 year average for the last few weeks. In the event of robust demand growth for diesel, we expect this barrier to be breached in the coming few weeks.

Asia’s naphtha crack dropped to $ 80 /MT yesterday. However, spot premiums held firm at around $ 10 / MT to marker quotes as supplies were still seen as tight.

Gasoline stocks in Japan rose 210,000 barrels to reach a three-week high of 10.57 million barrels in the week to March 3. Stocks in Fujairah however, fell by nearly 780 Kb to 7.64 million barrels

Asia’s jet fuel market stabilized on Wednesday after concerns that strong seasonal demand for the fuel was beginning to fade, leading to sharp losses in the previous two sessions

Firm buying interest for gasoil cargoes in the Singapore trading window helped flip the cash differential of Asia’s 10ppm gasoil to a narrow premium on Wednesday. There has been strong buying in the window all week with a 2018 record volume of 800 kb being traded on Monday and a total of over 2 million barrels this week.

Distillate stocks in Fujairah dropped marginally to 2.57 million barrels. Limited supply of middle distillates from regional refiners due to scheduled maintenance there contributed to the weekly decline in Fujairah stocks of the fuel.

Ex-wharf premiums of Singapore 380-cst high-sulphur fuel oil continue to face pressure this week from seasonally sluggish demand for bunker fuels as well as competitive supplier offers as they battle for market share and seek to clear inventories to make room for incoming cargoes.

Fujairah inventories jumped 34% to 6.5 million barrels in the week to March 5. The 1.66 million barrel increase in Fujairah fuel oil stocks over the past week is the second highest weekly increase ever, just shy of the record 1.69 million-barrel jump in the week to Feb. 27, 2017. The higher fuel oil stocks follow increased regional flows into the Fujairah oil hub with a total of 13 vessels discharging an estimated 502,500 tonnes of fuel oil into the storage hub over the past week.