The range for the day was relatively less than what we have been used to seeing over the past few weeks with Brent making a low of $65.30 and a high of $ 66.16/bbl. This has been the highest level seen in the past six trading days.

From the start of the year, the Brent-WTI spread has come in from $ 6.48 /bbl at the end of the year to $ 3.11 on Monday. The impact of the narrowing of the spread appears to have been the reduction in sale of US crudes to Asia, argues John Kemp, an analyst with Reuters. Against exports of 726 kb/d in November and 676 kb/d in January, exports of US crude to Asia in March are expected to be of the order of 290 kb/d.

Other factors weighing against such sales are the increase in freight rates (at around $ 29 / MT in early March as compared to $ 17 in September) and reduction in both OSPs and discounts thereto in the Asian market as refineries head in to turnarounds.

Saudi Aramco dropped its OSP for its flagship Arab Light crude by 55 cents/bbl for April loading cargoes bound for Asia. For cargoes to North Western Europe, the price drop was a massive $ 1.40 / bbl

Given current levels it is estimated that a differential of at least $ 4/bbl is necessary for the arbitrage to work. Once such levels are established, it is possible to protect purchase decisions using risk management techniques. Do write to sukrit@trifectaconsultants.net for more information on the topic. 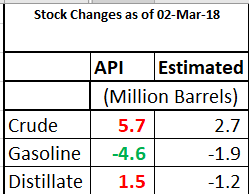 The API data released late last afternoon was a bag of surprises for market participants. While crude stocks built considerably more than expected and gasoline stocks drew a lot more than expected, distillate stocks threw up a surprising build of 1.5 million barrels against expectations of a draw.

The overall summary of the data is that there appears to be nothing in the data to push oil prices upwards for now.

As usual, the markets will await official figures from the DOE to be released early in the US morning today.

Asia’s naphtha crack eased yesterday after 7 days of rising to settle at $ 81.55 /MT yesterday. However, continued demand was reflected in spot prices with deals for second half April cargoes being closed at premiums of $ 8-10 /MT, 1-3 dollars higher than last week.

While LPG prices are more competitive a mix of more than 15% LPG in the feedstock could adversely affect product economics.

Asia’s gasoline crack to Brent settled at $8.09/bbl yesterday extending the streak of falls to five. Reports of rising stocks in the US are also not likely to do gasoline cracks much good.

Asia’s jet fuel cash premiums extended losses on Tuesday, falling to an eight-session low as slowing seasonal demand weighed on bullish sentiment that boosted the jet fuel market to multi-year highs since the start of the year. In another sign of fading market sentiment, the front-month jet fuel time spread also narrowed its backwardated structure to about $1.05 /bbl on Tuesday, down from about $1.35 /bbl in the previous session and around $1.45 /bbl on Friday.

Meanwhile, sustained buying interest for physical cargoes of 10ppm gasoil helped firm cash differentials of the fuel to minus 3 cents a barrel to Singapore quotes on Tuesday, up 3 cents a barrel from a 2018 low in the previous session.

Trade activity in the fuel oil derivatives market was muted on Tuesday while rising crude oil prices weighed on Asia’s front-month high-sulphur fuel oil crack. Broker sources pegged the front-month 380-cst crack to Brent crude at a discount of about $10.70 a barrel on Tuesday, down from a narrow range of about minus $10.25-$10.30 a barrel in the previous session