Oil prices fell to a one-month low on Wednesday after U.S. data showed a build in inventories and record high crude production, raising worries of more selling that could expose speculators with big bets on upward momentum in crude prices. Brent crude futures lost $ 1.35 to settle at $ 65.51 /bbl.  WTI lost $ 1.60 to close at $61.79 /bbl.

The fall in WTI in particular came with a volume of 957,000 front month futures trading which is around 50% more than the normal average value of 634,000 contracts. Any price move with high volume is stronger and far more sustainable. Therefore, it would seem that oil prices, for now, have peaked.

While the market reaction to bearish DOE data is natural, it seems to have been caught by surprise by the huge increase in volume of production which was reported at 10.25 mb /d. The EIA expects U.S. output to reach an average of 10.59 million bpd in 2018 and 11.18 million bpd by 2019, accelerating earlier estimates.

In other news,   Iraq as cut the March OSP for Basra Light crude to Asia by 35 cents to minus $0.40 per barrel against the average of Oman/Dubai quotes from the previous month. 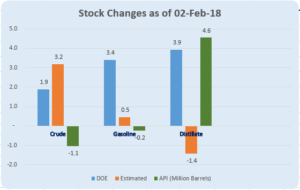 The DOE reported builds in both crude as well as the two major products tracked by the market. While the crude build was less than expected, the builds in both gasoline and distillate stocks was huge.

It is likely that this is the result of an unseasonally high refinery run rate of 92.5%, the highest for this time of the year in more than 10 years at least.

The jump in production figures to 10.25 mb/d suggests that it is now possible to ramp up production even higher quite soon.

On the positive side, gasoline demand has grown to 9.1 mb/d, once again a seasonal 10 year + high. This seems to be in consonance with a strongly rising economy. Distillate demand however slumped by close to 700 kb/d to 3.8 mb/d suggesting that the cold wave has come to an end.

Asia’s naphtha crack slumped 19 percent and was near a seven-month low, dragged down by lucrative alternative feedstock prices and rare offers from Egypt at a time when supplies are high. Prices of liquefied petroleum (LPG) gas have been trending down and this could result in more naphtha being replaced by the former..

Asia’s gasoline crack was at a five-session low of $8.80 /bbl. Six gasoline deals at $76 a barrel each were all snapped up by Singapore trader Hin Leong. Japan’s gasoline stocks edged up 30,000 barrels to reach a three-week high of 10.88 million barrels in the week to Feb. 3.

Asia’s jet fuel market extended gains on Wednesday as intense buying interest continued to boost the market complex of the fuel. The jet fuel market has been supported in recent weeks by a surge in prompt demand and tight availability. The strong demand for jet fuel cargoes helped boost cash premiums of the fuel to their highest since late-2013 amid a recent absence of supplier offers in the Singapore trading window. The February regradealso extended gains on Wednesday to its highest level in more than two years.

Middle distillates inventories in Fujairah rose 613,000 barrels, from a week ago to a total of 1.979 million barrels in the week ended Feb. 5. This is 62% lower than the previous year.

All the positions above are being taken off as a target of $ 1.00 / bbl has been achieved

Cash differentials of Asia’s 180-cst and 380-cst fuel oil extended losses on Wednesday amid an absence of buying interest for physical cargoes in the Singapore trading window and weaker prompt time spreads. Cash premiums of the mainstay 380-cst fuel oil fell to a three-week low of 35 cents a tonne above Singapore quotes, down from $1.12 a tonne at the start of the week.

Stocks in Fujairah snapped three straight weeks of declines, climbing to 7 million barrels (about 1.045 million tonnes) in the week to Feb. 5. This is above 25% lower than last year.