While US equity markets recovered strongly yesterday after chopping trading (the Dow Jones Industrial Average range for the day was 1100 points), this did not translate back into the Energy markets. This would mainly be due to the stronger US Dollar. Another factor would be the fact that the fall in Crude prices was not as drastic as that in equities. A third major factor would be that the ratio of longs to shorts two weeks ago was around 11 : 1. The drastic fall could have had a sobering effect on the market. 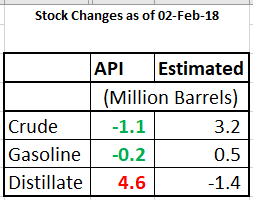 The market, as usual, will look to the DOE for corroboration of these figures.

For now, the market has reacted positively to this data with Brent futures trading nearly 50 cents higher at the time of writing.

Asia’s naphtha crack fell for the third straight session to hit a nearly 6-1/2 month low of $71.37 a tonne as a stubborn glut dragged on prices. Cash premiums for physical trade are currently in the $ 1.5 -2.0 /MT range, levels not seen since September last year.

The Asian gasoline crack to Brent continued to weaken, settling at $ 8.95 /bbl. yesterday.

We will take this position off our radar now given that it has yielded in excess of $ 1.0 /bbl

Sustained bullish sentiment in Asia’s jet fuel market and a slightly weaker gasoil market boosted the February regrade spread to its highest level in almost two years. A spike in seasonal demand for kerosene used in heating, especially from Japan and South Korea, has helped tighten jet fuel supplies and boost the overall market complex in the past two weeks.

Asia’s front-month high-sulphur fuel oil crack narrowed its discount to Brent crude on Tuesday for second straight session as crude oil prices continued to fall. The March 180-cst fuel oil crack to Brent crude was trading at about minus $7 a barrel around the end of Asia trading hours, its narrowest discount since Jan. 3 and compared with minus $7.58 a barrel in the previous session..

The February 180 cst crack is however valued much higher at -$ 4.45 /bbl. This seems to be more because of falling crude prices. The visco spread is slightly wider at $ 0.85 / bbl.