The DOE, in its weekly report yesterday, said that crude stocks had dropped substantially by 5.6 million barrels, but product stocks of gasoline and distillates had built by 6.8 million and 1.7 million barrels respectively. 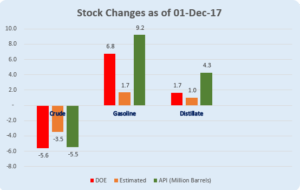 The product builds wiped the sheen off the crude draw as it was clear that domestic demand is not sufficient to create significant shortfalls in crude. Further, if we consider the impact of the Keystone shut down, the draw is really negligible. 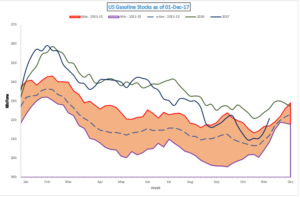 While gasoline stocks typically build at this time of the year, this huge build has pulled them way above the 5 year average for 2011-15 and very close to 2016 stock levels.

Gasoline demand has stayed below 9 million barrels per day (8.9 mb/d) disappointingly for the second week in a row. This comes at a time when driving is high for Christmas shopping. It would appear that the impact of Hurricane Harvey on gasoline stocks is now over and stocks have restabilized.

The material balance statement for the week is showing some anomalies in the gasoline figures. As per changes in various components, there should be a draw of 2.8 million barrels rather than a build of 6.8 million barrels.

This continues to remain one of the imponderables in the market.

No fresh news on the Naphtha crack for today.

The Asian gasoline crack settled higher on Wednesday notwithstanding the reported build of 9.2 million barrels by API as regional demand for the product offset the bearish news. Gasoline demand in the Middle East is firm on the back of several refinery turnarounds in that region. In addition, demand from the Phillipines, Vietnam and Indonesia is expected to prop up prices.

Jet Premiums remained steady notwithstanding significantly lower sales of the product in Japan this year. Gasoil appears to be supported with Fujairah distillate inventory levels being reported at a record low for the week to December 4.

Fuel Oil cash differentials fell to extremely low levels following aggressive supplier offers in the Platts Window yesterday. Inventory in Fujairah rose to 12.3 million, the highest since  July 2017. The crack for December has plummeted to – $ 4.35 for December. The visco spread has narrowed to $ 0.50 /bbl.