Adding to the woes of bulls was a report released by the EIA which revised crude production figures in November to a record 10.057 million barrels per day. However a reduction in crude production in December by 108 kb/d gave the market some succour.

A rising US Dollar increased the pressure on crude prices.

For today though, we expect the news that production at the 160 kb/d North Sea Buzzard field dropped by 50% this morning to support prices.  This drop was due to technical issues. Crude from the Buzzard field is the largest component in the Forties blend. 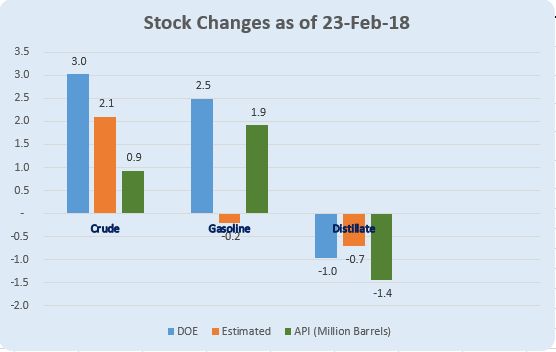 Given that the market was expecting a small draw in gasoline, the size of the build would have taken the market by surprise.

The build in crude stocks is largely attributable to an increase in imports (250 kb/d wow) combined with a decrease in exports (600 kb/d). Of not is the stabilization in production of domestic crude at 10.25 mb/d for the whole of February. It is clear that this number can only increase in the near future.

Our material balance report seems to suggest that gasoline may have actually drawn due to a considerable reduction in product where as distillate stocks should have built. Having said that, the drop in gasoline production reported is surprising given the other parameters of production.

Asia’s naphtha crack rose for the fourth straight session to reach a near one-month high of $80.05/MT on Wednesday due to North Asian demand, although liquefied petroleum gas (LPG) remained a lucrative alternative feedstock for some producers.

The March crack has further improved to $ 0.70 /bbl

Asia’s gasoline crack to Brent rose to $8.64/bbl, the highest since Feb. 12. Fujairah has reported an increase of 224 KB in its gasoline stocks to 8.4 million barrels

Asia’s jet fuel cash premium to Singapore benchmark prices eased from a decade high in the previous session in response to improved supplier offers in the Singapore trading window. After climbing sharply over the past four sessions, some market participants expected jet cash premiums to stabilise or ease as strong seasonal demand for the fuel wanes into the coming month

Middle distillate stocks in Fujairah rose by 201 KB to a four month high of 2.7 million barrels.

Asia’s front-month viscosity spread held steady on Wednesday, as buying interest for physical cargoes of 180-cst fuel oil cargoes emerged in the Singapore trading window but failed to attract any suppliers. The front-month viscosity spread, the price differential between 180-cst and 380-cst fuel oil, held at $7.50 /MT on Wednesday, unchanged from the previous session but slightly lower from an eight-month high of $7.75 /MT on Monday

Fujairah inventories fell 20% to a record low of 4.8 million barrels. Sluggish regional demand and increased shipments to Asia are the major contributors to the recent decline in stocks here.

We are going to be clubbing all our open recommendations at one place. Their status as of today is given below

We shall be taking off the hedging recommendations for March off this list effective today. We would like to point out though that our target of Jet-Dubai crack for March has been achieved.