Oil fell on Tuesday, its first decline in five days, pressured by a firmer U.S. dollar and expectations that upcoming weekly data will show an increase in U.S. crude inventories. Brent futures settled at $66.63 /bbl, an 87 cent drop from Monday.  WTI fell 90 cents to $63.01 /bbl.

In addition, IEA Executive Director commented that “explosive growth” in US production may extend beyond 2018, allowing the US to usurp Russia as the world’s largest producer by 2019, adding to supply concerns which have been weighing on the market lately.

Hedge funds and other money managers cut their combined net long position in the six most important futures and options contracts linked to petroleum by the equivalent of 48 million barrels in the week to Feb. 20.

The hedge funds’ net long position has been cut in each of the four most recent weeks by a total of 263 million barrels, in what has been the largest draw down for more than seven months.

Most of this liquidation seems to be attributable to profit-taking after the big rally in oil prices over the last seven months. Few fund managers have dared to initiate new short positions.

Fund positioning remains very stretched with longs outnumbering shorts by a ratio of almost 10:1, but down from almost 12:1 at the end of January. 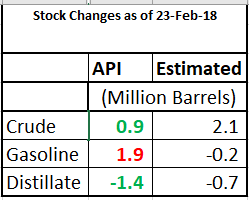 The American Petroleum Institute, in its report late last evening, said that Crude Oil inventories had risen by 993 KB. This was against an estimated build of 2.1 MB. While gasoline stocks built against expectations of a small draw, distillate stocks drew more than expected.

Overall, the report appears to be mildly bullish. However, its impact on crude prices was pretty muted as the market is viewing strength in the US dollar a little more carefully than US stocks at this point in time.

As usual, the markets will look to official figures from the DOE, to be released later today, for confirmation.

Asia’s naphtha crack rose for a third straight session on Tuesday to a near two-week high of $74.13 a tonne, but was 39 percent below the fourth-quarter average on sufficient supplies. Naphtha demand continued to emerge from North Asia, but fundamentals had not changed from last week. Cargoes continue to trade at premiums of $ 6 -7 / MT, similar to last weak.

The March crack has has further improved to $ 0.45 /bbl

Asia’s gasoline crack was at a five-session high of $7.85 a barrel up 45 cents from Monday. Like naphtha, there does not seem to have been much change in the fundamentals.

The sudden availability of supplies in the window may just be signalling a peak in jet premiums. Jet cracks are already at extraordinarily high levels apparently due to the combined impact of increase in demand for air travel and a cold wave in Japan requiring additional kerosene.

We are going to be clubbing all our open recommendations at one place. Their status as of today is given below