With the recent announcements by Saudi and Nigeria, there appears to be greater confidence among market participants that rising demand will offset excess supplies in the second half of the year.

Technically, the Brent charts are looking very positive with most of the technical indicators also pointing towards a further rise in prices. 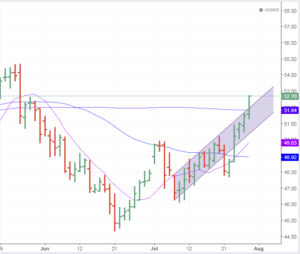 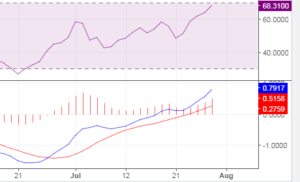 The Naphtha crack stays supported as spot demand emerged from South Korea, Japan, Malaysia and Taiwan. This was also reflected in the premiums being realized by sellers for spot cargoes. India’s IOC for example, was learnt to have sold 35,000 tonnes of naphtha for Aug 22-24 loading from Chennai at a premium of about $8/mt to its own price formula on an FOB basis as compared to a premium of $5/mt it got for a cargo loading Aug 1-3 loading from the same port.

Gasoline crack has strengthened even as stocks held independently at the storage at the Amsterdam-Rotterdam-Antwerp (ARA) hub was at a five-week high of 864,000 mt in the week to Thursday. What is relevant to note is that despite this increase, gasoline stocks were more than 30 percent lower than a year ago.

Gasoil cracks have also risen as positive reports of growth in diesel demand in China, the world’s No.2 economy began surfacing. Diesel demand in China is expected to grow by up to 0.3 % in 2017 and by 0.5 % in 2018 after shrinking by 3.5 % last year.

Fuel Oil cracks have eased on the back of high inventories across key trading hubs and plenty of cargoes being offered by various sellers in the spot market. Recently, India’s IOC was heard to have offered 35,000 tonnes of 380-cst for Aug. 24-26 loading from Chennai.