Crude prices continued their downward movement on the back of bearish DOE data. Brent closed 50 cents lower at $63.1 /bbl.  WTI settled at $57.30 /bbl., 69 cents lower for the day.

Apart from the DOE data, the market was also disappointed by conflicting messages coming from various oil ministers from the OPEC block.

Crude futures hit a session high after Kuwait’s Oil Minister Essam al-Marzouq said a key monitoring committee recommended extending the group’s supply-cut agreement through the end of 2018, but those sentiments were undercut by statements from Russia’s oil minister, who suggested the oil market still has yet to balance. The cartel is still weighing the offsetting factor of rising U.S. production, and considering a clause that would allow the group to review a potential extension at its spring 2018 meeting in May or June. Reluctance to agree a lengthy extension has been driven mainly by Russia. Moscow fears a strong price rally off the back of such a move could give an unsustainable boost to the rouble, one that harms Russian exports. Some Russian producers have questioned the rationale of prolonging the cuts, saying it will lead to a loss of market share to U.S. producers

The data released by the DOE, while not in synch with the API data was nevertheless bearish as can be seen below 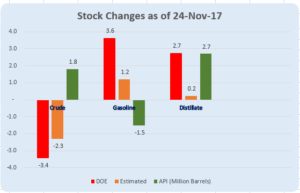 Gasoline demand was pretty dismal at 8.7 mb/d. Distillate demand too was lower at 3.9 mb /d.

As per our analysis, the production figures seem a bit odd. DOE has reported an increase in run rates from 91.3% to 92.6%. Yet, the production of both gasoline and distillates is marginally lower (see material balance table alongside)

Therefore, in terms of market rebalance, it is pretty evident to any reasonable analyst that the present level of production cuts are not making too much of an impact on ‘rebalancing’. If it were not for the shutdown of the Keystone pipeline, we would be seeing a very nominal change in crude stocks this week.

Although the naphtha cracks are valued lower this morning, demand for physical cargoes continues unabated. The physical Asian naphtha crack also settled at a two-session low of $127.10 /MT yesterday.

Of all the products, only the fuel oil cracks have managed to improve even though thee is a lack of buying interest for physical cargoes of high-sulphur fuel oil. The Platts Trading Window was also muted with no cargoes changing hands.