Crude prices continued to retrace as the reopening of the Keystone pipeline became more apparent. Brent, eased 23 cents to close at $63.61 /bbl.  WTI gave up 12 cents to settle at $57.99 /bbl.

The Keystone pipeline is now operating at 20% reduced pressure. There is no timeline on when it will return to full capacity. The fall may well have been steeper were it not for news of a fire at Exxon Mobils 362 kbd refinery at Beaumont Texas.

Tomorrow OPEC and non OPEC producers meet to discuss about the future regarding maintenance of the production cuts in place. While Saudi is very keen to extend the cuts for another 9 months. Russia may find it hard to agree with the proposal since output from its Sakhalin 1 Project is expected to increase by 25% in January.  Even within OPEC there are question marks about the duration of extension.  It is estimated that the debate will be between an extension for 6 months or 9 months. The market has priced in a 9 month extension, so anything less may see a sell off. 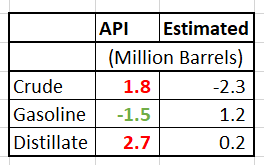 Distillate stocks also built by 2.7 million barrels, far more than expected. The only bullish spot was a reasonable draw in gasoline against expectations of a build.

It may be too early to project, but these seem to be the classic signs of a mild winter, leading to lots more gasoline consumption than expected and lots less Diesel / Heating oil, a phenomenon that was seen in the winter of 2015-16.

Notwithstanding all that, if this data is corroborated by the DOE, then it would imply that we are too far away from the ‘rebalancing’ which the OPEC is claiming is happening rapidly.

The December crack is marginally higher at $ 4.75 /bbl. We would recommend that hedgers increase their hedge at this level.

In other news, Indonesia’s Pertamina and Russia’s Rosneft Oil Co have agreed to enter into a joint venture for developing a new refinery and petrochemical plant in Tuban, East Java in Indonesia.

The Asian gasoil cracked dropped to a five-month low of $11.25 /bbl on Tuesday amidst increased supply of spot cargoes from India and Thailand. While India’s Essar Oil offered its fourth gasoil export cargo this month, Thailand’s PTT offered its second gasoil cargo for December.

Asian Fuel Oil market remains well supplied as a steady inflow of arbitrage cargoes into Singapore is anticipated for the remainder of 2017. For November, total fuel oil flows into East Asia are expected to be close above 7 million MT.