Trading was typically thin at year end, with many traders on vacation.

In other news,   China issued its first batch of 2018 crude import quotas, totaling 121.32 million tons for processing. The quota was given to 32 independent refiners and 12 state trading firms. In addition, fuel export quotas of 16.24 million tons under the general trade route were also assigned to state refiners. 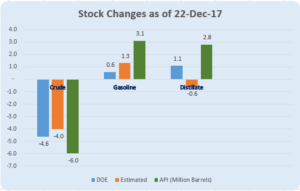 The DOE data reported a significant draw of 4.6 million barrels. However, it was smaller than the API draw. Inventories excluding the nation’s strategic reserve have declined more than 11 percent in the last year.

Higher refinery runs (95.4 % as compared to 94.1 %) undoubtedly caused the draw in crude and build in product stocks. 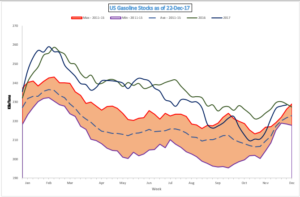 Gasoline stocks were up 591 Kb, less than the expected build of 1.3 million barrels.  There was a healthy growth in demand to 9.4 mb /d in this weak.  Having said that, the high runs mean that Gasoline stocks are almost at the same level as this time last year.

Distillate stocks surprisingly built by 1.1 million barrels against an expected draw of  600 Kb. The build has been caused by a significant drop in demand of 454 kb /d along with a drop in exports of 109 kb / d.

The Asian naphtha crack recovered yesterday to $ 118.70 / MT. Although spot purchases ebbed this week, overall demand has soaked up a lot of the supplies.  Spot premiums paid this week for naphtha scheduled for delivery to South Korea in the first half of February, at more than $11 a tonne to Japan quotes cost and freight (C&F), reflected tight supplies. About a year ago cargoes scheduled for the corresponding period were at discount levels.

The January Naphtha crack is valued higher at $ 3.40 /bbl.

Asia’s gasoline crack recovered 1.6 percent to $7.76 a barrel after falling to a 9-1/2 month low the previous day. 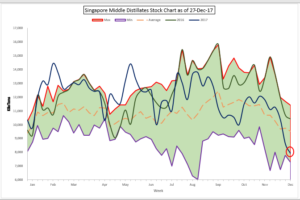 Singapore onshore middle distillate stocks slid to a three-year low of 7.911 million barrels in the week to Dec. 27, down 7.9 percent from the previous week, the latest data from International Enterprise (IE) showed.  The last time Singapore middle distillate stocks were lower was in the week to Dec. 17 in 2014, when they stood at 7.764 million barrels.

However, China’s increased allowances for 2018 oil product exports weighed on sentiment and had some traders expect this to pressure overall refining margins in the new year.