Benchmark Crude prices moved and settled in opposite directions yesterday in the wake of mixed U.S. Inventory data released by the DOE yesterday. Brent closed down 54 cents to settle at $57.90 /bbl while WTI ended 26 cents higher to settle at $52.14 /bbl.

With the Brent-WTI spread touching their highest levels in more than two years, U.S. crude has become increasingly competitive in foreign markets as evidenced by their export numbers which hit a record of 1.5 million bbl/day last week. 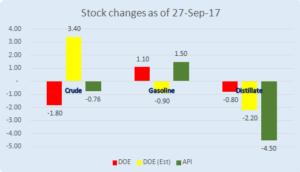 Refineries operated at 88.6% of their operable capacity last week, up from 83.2% in the week earlier. The Domestic production of crude last week was also up by approximately 37,000 bbls/day at 9.54 million bbls/day as compared to the previous week.

The naphtha cracks continued to slide amidst a quiet physical market attributed to the ongoing APPEC conference in Singapore.

The gasoline cracks have also fallen on the back of a surprise build in U.S. Gasoline inventories as declared in its weekly Report by the DOE yesterday.

The distillate cracks have managed to strengthen as some fresh spot demand in the market is keeping traders interested. In the Platts Trading Window, three Singapore gasoil cash deals were reported.

Fuel Oil cracks have also posted a small gain on the back of expectations of narrow arbitrage arrivals into Singapore, stock draws and firming demand.