The DOE data was in rarely close conformity with the API data and the market was taken aback with the levels of draws in products. However, there were bearish elements which we shall discuss in our section on the DOE data.

In other news, the Ceyhan pipeline is still pumping at around 250 kbpd. Iraq’s North Oil Company is reportedly working with the Kurdish Kar group to facilitate the process of getting the shut portions back completely on stream.

The DOE reported a build of 856 Kb in crude stocks and draws of  5.5  and 5.2 million barrels in gasoline and distillate stocks respectively. 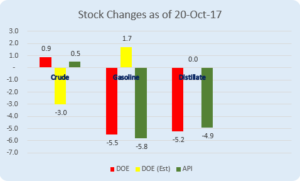 Very rarely do we see such a high degree of similarity between DOE and API data.

While the crude data seems more or less in consonance with what could be seen on the ground, the high draws in products appear terribly bullish. We shall see if there is some rationale for these numbers.

If we look at gasoline numbers, we can see that gasoline production dropped by around 100 kbpd even after an increase in refinery runs from 84.5% to 87.8%. This is not unreasonable given that refineries would be changing to gasoil mode for the winter. Imports dropped by around 450 kbpd. Exports increased by 280 kbpd. And finally consumption (gasoline demand) increased by 180 kbpd. This drain on the system is of the order of 1 million barrels per day of which only 20% is due to increased demand. Therefore, we can safely say that the gasoline numbers are not bullish.

If we look similarly at distillate numbers, we get an increase of just 10 kbpd in production. This level seems grossly at odds with the increase in refinery runs. Imports increased by 25 kbpd. Exports increased by 135 kbpd. And finally demand increased by 620 kbpd. The net impact is of the order of a draw of 725 kbpd which appears reasonable.

On the bearish side, Crude production is right back up at 9.5 million barrels per day, in increase of 900 kbpd the levels prior to Nate and Harvey. The build in stocks is not higher thanks to higher refinery runs (roughly 600 kbd) and exports (125 kb/d) to offset higher imports of 600 kbpd.

The above numbers would suggest a higher build in crude stocks as well. So we are not quite sure what we are seeing here.

The Gasoline cracks have receded slightly after moving up in the past few days. However, demand from U.S. buyers is keeping the market supported.

Distillate cracks have also eased on the back of increased spot supplies from Russia and India. Additionally, China is also expected to increase its exports of the fuel with refiners applying for more export quotas.

Fuel Oil cracks have risen amid muted trading activity which saw only one cargo of 20,000 MT of 380 cst fuel oil traded in the Platts window. Hin Leong was the seller while Coastal was the buyer.