For the next few days, the US market is going to be focused on Texas as the tropical depression Harvey is expected to strengthen into a Category I hurricane by Friday. As the depression is headed towards Houston, operators in the area are already closing down platforms and evacuating workers as a precaution. 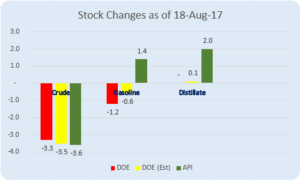 While this was more or less in line with expectations, the market took two factors into account to decide that this was bullish; the fall in Gasoline stocks being a bit more than anticipated and the continuous streak of draws in crude cementing the impression that stocks are indeed ‘rebalancing’.

US crude production increased to 9.53 mbpd, marginally short of the highest level reached in 2015. Gasoline demand gaining week over week was also regarded as a positive sign though it is still lower than last year’s deman.

Naphtha cracks have strengthened further as spot demand is soaking up supplies. Several cargoes for delivery in October were heard to have changed hands in Asia.

Gasoline cracks have also managed to rise on the back of bullish DOE data which  saw gasoline stocks falling by 1.2 million barrels.

Distillate cracks continue to climb as trader continue to keep a watch on a possible arbitrage opportunity to ship diesel cargoes from Asia and the Middle East to Europe. The Asian market appears to be well balanced which is supporting gasoil prices.

The Fuel Oil cracks have fallen as additional supplies are expected to come into the market.