Crude prices moved up notwithstanding data from the DOE that could be construed as distinctly bearish. Brent settled 75 cents higher at $63.32 /bbl. The Jan-18 WTI future, which became first month today gained $1.19 to settle at $58.02 /bbl., the highest level seen in two years

The rise is prices has been in reaction to the news that the 590 kbd, Keystone pipeline from Canada to the US could take far longer to restart than previously expected. This has also resulted in WTI crude prices flipping into backwardation, a phenomenon not seen since Dec. 19 2014. This medium term shut down appears to have had a far greater impact than we would expect. If we can have bearish DOE data AFTER the pipeline has been shut down, what would have happened had it been running full tilt?

In other news, exports from the Kurdistan region to Ceyhan have risen sharply to 360kbd, although this is expected to fluctuate between 240-360kbd over the next few days.

The DOE reported a draw of 1.9 MB in crude, nearly flat (+44 kb) gasoline and a build of 269 kb in distillate stocks yesterday 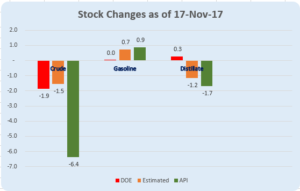 The primary reaction to this would be bearish, particularly as the draw in crude was far less than the 6.4 million barrels reported by the API. In our opinion, if the Keystone pipeline were not shut down, the data would appear far more bearish.

Having said the above, gasoline showed an extremely healthy growth in demand at nearly 9.6 mb/d. Diesel demand, though, was virtually flat.

Material Balance analysis would suggest that crude should have actually drawn. whereas both Gasoline and Distillates should have shown a stronger build

The Asian naphtha crack recovered to a one week high of $125.65 /MT on Wednesday. This rise in physical crack was aided by fresh demand coming from  South Korean firms Lotte Chemical and SK Energy.