Crude prices showed mixed trends yesterday as market struggled to seek for direction from here. Brent settled 14 higher at $ 56.43/bbl, while WTI lost 14 cents to settle at $ 50.55/bbl. This loss may have been due to adjustments necessitated by the expiry of the front month (Oct-17) contract.

For now, the markets await the outcome of today’s discussion among OPEC countries on the future status of production cuts.

Demand for Naphtha cargoes is now apparent beyond the spot contract of first half November as buyers could be seen for second half November deliveries as well.

The Gasoline physical crack continued to drop, settling at $ 10.42 /bbl yesterday, one of the lowest settles in the past two months. Not only has the demand from US / Mexico for gasoline receded, but also stocks in Singapore have increased by 272 kb to reach

Premiums for diesel and jet eased further yesterday despite significant trading activity in the window yesterday where 7 gasoil trades and 2 jet trades were reported.

There are signs that fuel shortages in New Zealand are reducing after a spokesman for the country’s oil industry stated that rationing will partially ease from today. 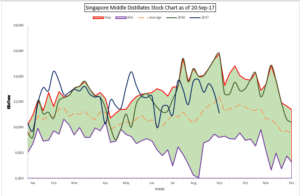 We would recommend caution while hedging gasoil at these levels.

Fuel Oil cash premiums remained steady notwithstanding a stock build of 1.1 million barrels in Singapore However, the cracks have eased.