The markets shrugged off what could be considered as bearish data from the DOE to settle sharply higher as the huge product draws brought stocks below 2015 levels. 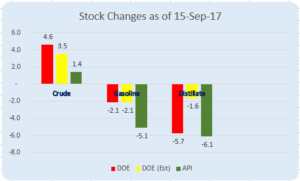 The DOE data showed huge draws in products and a disappointing recovery of refineries which suggested that they will take longer to get back on stream. 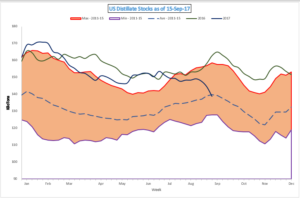 While both Gasoline and Distillate stocks are below 2015 levels, distillate stocks are actually below the 5 year average of 2011-15 for the first time in a long long time. This large dip in stocks has been primarily caused by the long time being taken for refineries to return on stream.

Refinery run rates were up 5.5% to 83.2%. Given the earlier levels of draws with runs well into the 90 percents, this does give rise to the possibility of fast depletion of stocks. Especially in distillates.

Gasoline demand was steady at 9.44 mb/d. Diesel demand too was healthy at 4.3 mb /d. While these levels are comparable to last year’s levels, this could actually be bullish data as demand would have been impacted to some extent by Hurricane Irma in Florida.

On the bearish side was the crude production figure of 9.51 mb/d.  This is just short of the 9.56 mb/d high achieved a month ago. Higher crude prices will actually help producers lock in hedges for increased production. Secondly, crude stocks are inching their way up to 2016 levels. This after crude export rates have returned to pre Harvey levels at 908 kb/d.

So lower run rates would result in a glut of crude stocks which would once again bear on the markets post normalization.

Having said the above, OPEC has been heard to be making remarks like extension and / or deepening of crude production cuts. While extension cannot be ruled out, it is hard to see consensus being achieved on deepening of cuts.

Demand for Naphtha cargoes continued to be firm with many consumers like LG Chem, GS Caltex, Malaysia-based Titan, Chinese CNOOC and Taiwan’s Formosa emerging to buy naphtha for first-half November delivery. This came a day after Lotte Chemical, SK Energy, Hanwha Total and Idemitsu had purchased 120 KT in the window on Tuesday.

The October crack  is valued slightly lower at $ 2.40 /bbl

The Gasoline crack continued to settle lower as demand seems to have tapered off. The physical crack settled at $ 11.69 /bbl yesterday, a six week low.

Premiums for low sulphur diesel eased yesterday as Winson Oil and Unipec slowed down their purchase of cargoes in the window.

Fuel Oil time spreads increased to a more than 4 month high on expectation of lower arrivals of supplies into Asia in the near term.