The reasons for the sharp rise are not exactly clear. It would be a combination of factors including profit taking by the shorts, a leakage in the Keystone Pipeline causing a short term shut down of supplies from Canada as also the politico – economic goings on in the OPEC – Saudi discussions.

The rise was, however, not enough to wipe out the losses during the first four days of the week. Brent lost around 1.3% for the week. WTI’s losses were much less at 0.3% as the Brent-WTI spread came in.

Going forward, the only new input this week is slightly bullish short term as  the shutdown in the Keystone pipeline could lead to shortages at Cushing. The Baker Hughes rig count remained unchanged at 739 rigs. Funds have gone even longer on WTI futures and options. This should add concerns to liquidation risks.

Markets will be looking that the US stock data for inspiration for direction.

With crude prices showing their first weekly drop in six weeks, one can expect the oscillators to have turned around. Having said that, yesterday’s strong rebound from the $ 61.00 area suggests that the bullish tone is very much intact notwithstanding the fact that prices have pulled back into the rising channel in both daily and weekly charts. 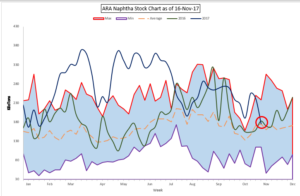 The physical Naphtha crack recovered from Thursday’s lows to $ 124.48 / MT. Market participants feel that the lack of availability of cheaper LPG cargoes as feedstock could keep demand propped up even with the enhanced supply.

Naphtha stocks in ARA plummeted to touch the 5 year average.These levels have not been seen since January 26 this year. 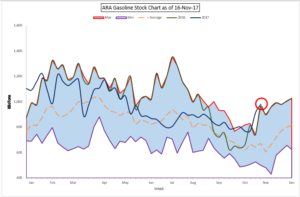 After both Singapore as well as the US reporting builds in gasoline, ARA also followed suit with gasoline stocks rising to their highest levels of this time of the year

This would be in keeping with the arrival of the end of the driving season. However, a mild winter (which is what the IEA reported) could see stocks getting consumed faster than expected.

Gasoil margins rose on Friday on the back of spot demand from Vietnam, who expects to shift to Euro IV standards from January 2018.

Fuel cracks continued to firm up on Friday and have recovered most of their losses in the week. However, the 180 cSt crack appears to have given up its gains this morning.

While ARA stocks fell, it was attributed to a partially loaded VLCC heading to Singapore and another cargo of unspecified size heading to West Africa