Crude prices closed higher yesterday after the DOE released data that was difficult to interpret without deep analysis. Brent closed 27 cents higher at $58.15 /bbl while WTI gained 16 cents to settle at $ 52.04 /bbl.

A higher than expected crude draw seemed apparently bullish, especially when combined with a reduced run rate. However, a deeper inspection of the figures, which we shall do later seems to suggest that the data is actually bearish.

In other news, Oil exports through the Kurdistan-Ceyhan pipeline in Iraq has dropped to roughly 240 kbpd as compared to the normal 600 kbpd. This is days after Iraqi forces retook the province of Kirkuk and temporarily halted production. 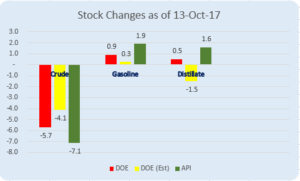 While the crude draw was larger than expected, if we take into account a drop in US crude production of close to 1 mb/d, the figure appears far less alarming than it would ab initio. The drop in US production was due to shutting in of capacity as a precaution against Tropical Storm Nate.

If we further take into account the increase in exports of crude of 500 kbpd, combined with a drop in imports of 200 kbpd, the crude data appears almost bearish.

We therefore believe that the premium in prices is now entirely due to geopolitical risk rather than supply demand issues. And therefore, these levels may not sustain.

The Physical naphtha market appears to be supported with strong demand mopping up available supplies. Against an expected demand of 1.5 million MT, approximately 1.3 million MT of Western naphtha is expected to land in Asia in November.

The paper cracks for November is however marginally lower at $ 2.85 /bbl.

The paper gasoline crack has improved even though the physical market remains well supplied and inventories across major trading hubs are high.

Sustained exports from India, which typically recede after the monsoon season as domestic demand picks up, have weighed on Asian gasoil cash differentials since the start of the week. Also, weaker demand for 500ppm sulphur gasoil cargoes as many countries are slowly moving away from that grade to lower sulphur ones, weighed on premiums and helped widen the spread between 10ppm and 500ppm grades.

Adding to the bearish gasoil sentiment is the trend in European passenger car sales to move away from diesel engines and towards gasoline. Data from various European countries show that the market share of diesel passenger vehicles in new sales has declined to around 44 %.

Limited spot demand for bunker fuels was not only impacting ex-wharf premiums of Asia’s 380-cst fuel oil but has also weighed in on the paper cracks.