The rise in prices, along with bullish DOE data, is being ascribed to reports from the IEA suggesting an increase in demand. The increase in Chinese imports was also a factor of much cheer to the bulls.

We are of the opinion that these factors would act more to put a bottom in place for oil prices rather than spurring growth to new highs.

On the supply side, as oil prices rise, shale producers get the opportunity to hedge even further out making their operations even more sustainable. We are yet to see the impact of US production rise to the anticipated level of close to 10 mbpd. Baker Hughes also reported an addition of 2 oil rigs in the US, bringing the rig count up to 765 which would suggest that even 10 mbpd is not really the cap. Among non US suppliers, we are seeing compliance with the production quotas slipping a bit with no indication to suggest that they will be adhered to in future.

On the demand side, the demand growth in the US has been mild for gasoline, if at all. And we are still in driving season. What is likely to happen once this demand tapers off is anybody’s guess.  While distillate demand has been strong over the past few months, distillate stocks are at their highest for this time of the year. Unless we get something like an extremely severe winter, we are unlikely to see a depletion in these stocks. 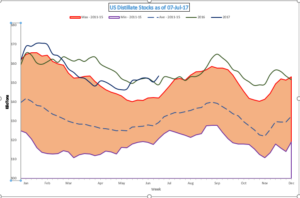 Technically, the daily chart suggests that we may be in a Wave (c) of IV if we take the fall from $56.65 to $ 46.64 as wave I. The subsequent fall from $ 54.67 to $ 44.35 would be the Wave III (barely, but just about qualifies as Wave III).  This would suggest that another strong fall is in the offing from some level in the near future. For the immediate though, oscillators are still showing bullish leanings.  Having said so, we are approaching the 50 DMA as a resistance point.

The weekly charts show a an interesting rising channel within a falling channel with the boundaries of neither channel being tested seriously currently.  The MACD appears to be rising fast towards a cross over and a strong week should see this happen.

Naphtha market continues to be under pressure as buyers take advantage of the supply glut by procuring cargoes at lower prices. South Korea’s LG Chem was heard to have bought naphtha for second-half August delivery at discounts of around $3.25 /MT to Japan quotes on a cost-and-freight (C&F) basis, better than the discount of $3.00 /MT it paid only a few days ago for a cargo for the same delivery period. There was also news of Taiwan’s Formosa Petrochemical Corp having bought 60,000 tonnes of naphtha for second-half August at a discount of about $5.00 /MT to to its pricing formula, the lowest price paid by Formosa since December 2016.

Asia’s Gasoline crack have managed to strengthen slightly even as stock levels rose in the Singapore hub but fell in Europe and the United States.

Fuel oil cracks have fallen marginally as Singapore onshore fuel oil inventories rose 2 percent, or 67,000 tonnes, to a total of 3.27 million tonnes in the week to July 12 despite a 28 percent drop in net imports. In contrast however, Fuel oil stocks in the ARA hub fell 14 percent to a three-week low of 825,000 tonnes in the week to July 13. ARA fuel oil inventories are now down 12 percent from the same time last year.