Yesterday’s rally apparently did not have much to do with Oil Fundamentals. Saudi Energy Minister Khalid al-Falih said major oil producers would prefer tighter markets than end supply cuts too early. Markets also benefited from more weakness in the dollar , which dropped 0.7 percent after stronger-than-expected U.S. consumer inflation figures.  Oil has also of late been trading in tandem with stocks, which finished the day up more than 1 percent

The massive increase in US production has been having an effect on physical markets as prices for crude from the North Sea, Russia, the United States and Middle East have dropped to multi-month lows.. 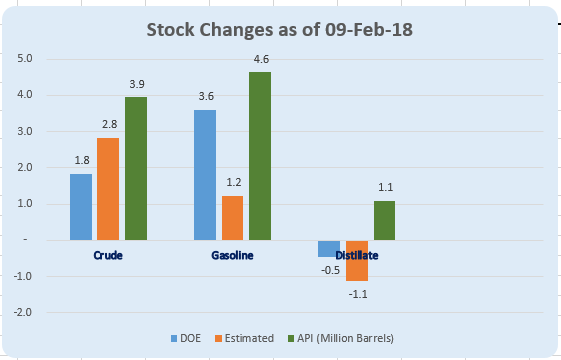 This week saw a decline of 2.7% in run rates to 89.8%. Significantly, this decline was 3.3% in the Gulf Coast region due to maintenance on some important sites.

The material balance shows a significantly different picture from reported stock levels. With gasoline demand at an impressive level of 9.06 mb/d as also distillate demand at 4.08 mb / d, the product build in gasoline appears a bit exaggerated.

Asia’s naphtha crack rose for a second day to reach a six-session high of $71.03 a tonne on Wednesday, supported by recent demand and weaker raw material Brent oil prices.

Buyers including Singapore’s PCS, South Korea’s Lotte Chemical, China’s Unipec and Taiwan’s Formosa were in talks to buy naphtha under term contracts. Results of the term deals were not immediately clear, but buyers such as PCS were aiming for discounts for a contract running from April 2018 to March 2019.

Asia’s gasoline crack fell to an almost one-month low of $7.57 a barrel as supplies built. Singapore’s onshore light distillates stocks, which comprise mostly gasoline and blending components for petrol rose by 143,000 barrels to reach a 10-week high of 14.12 million barrels in the week to Feb. 13,. 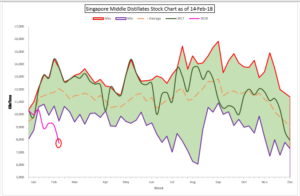 Asia’s jet fuel cash premium to Singapore benchmark prices stayed unchanged at $1.10 a barrel from the previous session where the value rose to highest in more than five years due to tight supplies. Singapore’s onshore middle distillates stocks plunged by 1.44 million barrels, to an over four-year low of 7.7 million barrels in the week to Feb. 13.

This came as official data showed the Singapore and Fujairah oil hubs each posted declines in their weekly stocks of fuel oil.  Singapore weekly onshore fuel oil inventories dropped 4 percent from their highest so far this year to 22.828 million barrels in the week ended Feb. 13.  In the United Arab Emirates, fuel oil inventories tumbled 24 percent to a record low of 5.298 million barrels in the week to Feb. 12