Oil prices ended largely unchanged on Tuesday as a weaker dollar spurred a rebound from an early slide after the IEA forecast that supply could outstrip demand. Brent crude futures settled 13 cents higher at $ 62.59 /bbl.  WTI, however, gave up 10 cents to close at $59.19 /bbl.

The IEA in a shortened monthly Oil Market report commented “Today, having cut costs dramatically, US producers are enjoying a second wave of growth so extraordinary that in 2018 their increase in liquids production could equal global demand growth.” This could pose problems for the cartel with Iran, as well as Russia, straining at the leash.

As mentioned in an article on Bloomberg. “A massive week-on-week jump of 332,000 barrels a day must be treated with caution, though. U.S. drillers didn’t have a sudden rush of enthusiasm as WTI prices broke through a psychological $65 ceiling. Rather, the weekly data, which aren’t revised retrospectively, are catching up with monthly estimates that give a more accurate picture of output.”

Saudi Arabia appears to be caught between a rock and a hard place as falling prices could affect its IPO, thereby preventing it from applying its previous strategy of flooding the market. 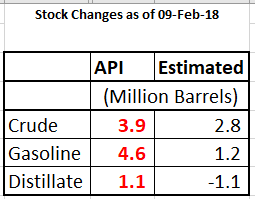 The API data too failed to provide an cheer to bullish traders with both crude as well as products reporting significant draws. Given that the market expected a draw in distillates, the report is quite bearish.

If this report is confirmed by the DOE, the market will need a very weak dollar to sustain at these levels or climb.

Asia’s gasoline crack fell to a 2-1/2 week low of $7.69 a barrel as deals came to a standstill in the Singapore cash market following a recent buying spree by Singapore trader Hin Leong.

Asia’s jet fuel cash premium to Singapore benchmark prices extended gains to $1.10 a barrel on Tuesday, the highest in more than five years. Demand for air travel and the need for kerosene for heating in Japan have supported the market. After the cold season passes, refineries in North Asia will begin maintenance and this will impact supplies.

Asia’s front-month high-sulphur fuel oil crack narrowed its discount to Brent crude on Tuesday for a third straight session, boosted by falling crude oil prices since the start of February. At close of market yesterday, the March crack to Brent was quoting at nearly 85 cents higher than on Monday.

The March 180 cst crack is also valued much higher at -$ 3.00 /bbl. The visco spread stays at $ 0.95 / bbl.  We would recommend hedging the crack at current levels and adding more if it strengthens further.