Crude prices continued correction after the market perceived the data released by DOE as bearish. Brent settled 90 cents lower at $62.44 /bbl. WTI gave up 54 cents to settle at $ 56.60 /bbl

Crude prices had another volatile day yesterday with Brent moving up to as $64.32 before settling close to the low, which was almost $ 2 /bbl lower at $ 62.30. The market started the day on an optimistic note after the strong crude draw reported by the API which, in the light of the Forties shutdown looked like it could cause a shortfall. However, the US markets continued to book profits erasing all gains of the day even before the DOE data could be released. They apparently did not see anything exciting in the DOE data either which led to a further sell off.

Forties crude loading revisions for December and January will be issued tomorrow, according to a Bloomberg report. Deferrals of up to 15 days can be expected, while it remains unclear if cargos will be canceled from the loading program. Ineos has declared force majeure on all shipments of crude oil, natural gas and condensates through the pipeline and said the shutdown is likely to last 2-4 weeks.

In a way, the next 4 weeks or so should be interesting. If the market is able to survive without the Forties supply, its returning on stream could trigger off a major sell off.

For now though, it looks like crude is following the pattern of the last few weeks where Thursday and Friday have seen the markets recover strongly from bearish data for one reason or the other. At the time of writing crude is up 40 cents, probably bargain hunting. 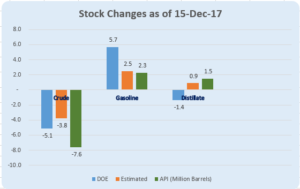 Demand for distillates grew by a huge 643 kb/d, a 16% + increase in demand. Demand for gasoline was stable. While refinery rates dropped to 93.4% they are still pretty high.

Our material balance statement shows that while run rates dropped, gasoline production increased by 421 kbpd and distillate production dropped by 155 kbpd. This production pattern seems a bit anomalous, but it may account for the drop in distillate stocks. On the whole, what it would imply is that the draw in distillate stocks is nowhere as alarming as it may have appeared to the lay follower of the data. What is most surprising though is the material balance of crude. You have produced more crude, you have imported more crude, you have exported less crude and you have used less crude. HOW can there be a draw then in crude stocks?  It must be anomalies like this which make the data seem bearish.

No significant news on the Naphtha markets today.

The January Naphtha crack is marginally lower at $ 4.00 /bbl

The Asian gasoline margin edged higher on Wednesday on the back of spot demand from Sri Lanka and Vietnam and on supply disruption in India. Indian Oil Corp has shut the fluidised catalytic cracking unit (FCCU) at its 300,000-barrel- per-day Paradip refinery on the east coast of India, a company spokesman said. The FCCU was shut after a fire broke out at a nearby facility at about 1100 hrs local time

Markets remained steady yesterday supported by spot demand from Vietnam and disruption to supplies from India. ri Lanka’s imports of oil products are expected to increase in January as the country stocks up ahead of a major refinery maintenance in early February. Japan’s kerosene stocks fell to a 10-week low in the week to Dec. 9, while sales of the fuel rose 21.1 percent on the week, latest data from the Petroleum Association of Japan showed.

Cash premiums of Asia’s 380-cst high-sulphur fuel oil once again dipped as traders seek to lower their inventory at the end of the year. ngapore’s marine fuel sales climbed to 4.316 million tonnes in November, up 4.2 percent from a year earlier, with fewer vessels coming to the world’s largest bunkering hub but loading a record amount of bunker fuel per vessel on average, official data showed on Wednesday. The larger sales would have been due to the buyer’s obligation to lift volumes as per term contract.

The fuel oil cracks appear to be much stronger, arguably due to the lower price of crude. The January crack at – $ 3.60 /bbl with the visco spread at $ 0.65 /bbl