Crude prices seemed to have resumed their upward trend over the past two days after Wednesday’s setback post DOE data. Brent posted a second gain  around a dollar plus to settle $63.40 /bbl, $ 1.20 higher. WTI gained 67 cents to settle at $ 57.36 /bbl

Market sentiment was buoyed by  data showing China’s oil imports rose to 9.01 million bpd last month, the second highest on record, data from the General Administration of Customs showed on Friday. Booming demand will push China ahead of the United States as the world’s biggest crude importer this year.

Threats of a strike later this month from a union in Nigeria, Africa’s largest oil exporter, was also supportive.

The rallies of the past two days though, were not sufficient to post a rise in crude prices for the week. Brent suffered a loss of about 0.6%. WTI posted a loss of roughly 1.7% for the week, its largest weekly drop in two months.

Fears that rising U.S. output would dampen OPEC’s efforts to rid the market of excess supplies prevented prices from rising much further, according to market participants.

U.S. energy companies added two oil rigs in the week to Dec. 8, bringing the total count up to 751, the highest since September, according to Baker Hughes report on Friday.

Hedge funds and money managers marginally cut their bullish bets (by 4,000 lots) on U.S. crude in the week to Dec. 5, the U.S. Commodity Futures Trading Commission (CFTC) said on Friday on fears of higher U.S. production.  While the long positions still remain at record levels, short positions rose by around 7,000 lots

Prices bounced nicely off a support at the $ 61.10 level, a multi bottom support in the daily chart. That the rising channel was also at the same line was a happy coincidence. This level has to be the one to break now even as the 50 DMA approaches it.

Both daily and weekly charts are increasingly showing bearish divergences. The last two days have been strong up days for flat prices. However, the MACD line is moving closer towards zero. Further, at the end of last week, the signal line was poised to cross the MACD line from below. Not only did that fail to happen, but also at the end of this week, which ended in a very small loss for the price, the signal line moved away considerably from the MACD line.

The weekly chart now shows two uncertain candles. While the candle of the week prior to the last can be called a spinning top, last week’s candle looks like a hanging man candle , which is a precursor of a turn around. 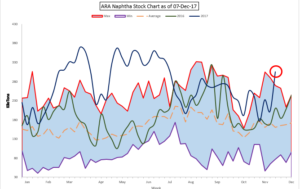 Naphtha prices rose on Friday as well, but the rise was capped by fresh offerings out of India.

In other news, Naphtha stocks in the ARA have jumped by over 50% to 303 KT for the week ended 07 Dec 17. This seems to suggest that Naphtha strength may not last for much longer than here.

We had recommended hedging the crack in excess of $ 4.00 / bbl and, for now, it looks like this hedge will lose money.

Having said that, the beauty of hedging is that this loss is offset by obtaining a higher price on the physical cargo ensuring a good margin for the product. This is the philosophy of hedging. We would recommend hedging the January crack as well at current levels of $ 4.15 / bbl

The balance December naphtha crack is valued at $4.70 /bbl whereas the January crack is at $ 4.20 /bbl

After climbing on Friday, the paper Gasoline cracks are valued lower today as markets are well supplied with inventories across key trading hubs remaining high.

Distillate paper cracks are valued higher today even as fresh spot is being counterbalanced by firm regional demand spot supplies from India. Among the sellers is India’s Mangalore Refinery and Petrochemicals Ltd (MRPL) which recently offered 40,000 MT of ATF and 80,000 MT of 50ppm sulphur diesel for loading in early January.

In other news, Mauritius has turned to Saudi Arabia to meet its fuel demand after its dispute with a shipping firm led to a halt in supplies from India. For several years India’s MRPL had been the sole supplier of fuels (except LPG) to Mauritius but the island nation is now forced to turn to other suppliers after an Indian Court, in response to a petition by Mauritius-based shipping firm Betamax, barred fuel supply to Port Louis.

The Fuel Oil cracks continue to slide amidst rising inventories across trading hubs and sluggish demand.