The goings on in Saudi Arabia remain a cause for concern. And given the amount of crude the kingdom provides to the world, uncertainty there could certainly cause havoc in the supply demand balance for oil. So far all the action has been pretty one sided. However, moves of this sort often lead to political unrest. For now, rumors are rife that Saudi King Salman may hand over power (cede power?) to his son Mohammed bin Salman in the next couple of days.

In other news, the EU’s revamped Markets in Financial Instruments Directive (MIFID), known as MIFID II, aims to curb speculative trading and make markets more resilient. It comes into force in January and includes position limits on the volume of commodity derivatives a trader can hold, such as Brent oil futures.

The Naphtha physical crack too recovered from Tuesday’s slump to settle at $124.38 / MT yesterday. This drop is however regarded as merely circumstantial rather than reflective of slacking of demand.

Gasoline stocks in Singapore were reported to have fallen by 857 kb to 10.7 mb last week. This is very close to the 5 year average of stocks at this time of the year. US stocks also have been drawing significantly over the last few weeks and are currently at their lowest levels since November 2014. 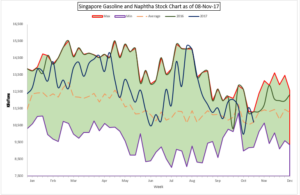 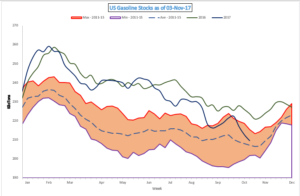 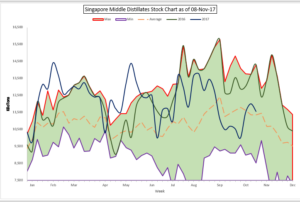 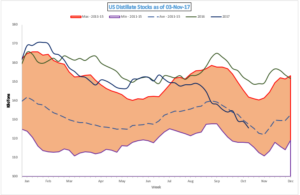 A continued drop in product inventories may well have eventually bump crude prices up. However, it is probable that motor fuel cracks may rise.

In what must come as a relief for bulls, fuel oil stocks in Singapore dropped by 2 million barrels to 23.67 million barrels. This is the largest drop in stocks since September. Nevertheless, ample supplies are expected going forward including an AFRAMAX from Saudi Arabia which, according to ship tracking data is expected to reach Singapore by November 11.