The bearish DOE data was supplemented by a reported decline in China’s crude imports for October to just 7.3 million barrels from a near record 9.3 million barrels in September. This was likely due to Golden week holiday as well as some independent refineries running out of quota for 2017.

Also in the news yesterday was Chinese government’s announcement to issue up to 142.4 million tons of crude import quota to non-state companies for the year of 2018. The notional amount is more than 60% than total quota given out throughout 2017. However, the headline figure does not provide details on when and how these quota will be distributed, or how much will go to the new refineries (Rong Sheng and Heng Li). Furthermore, without licenses to export products, it’s rather questionable how much more independent refineries can run above 2017 levels.

The negative news was offset somewhat though by the rising tensions in the Middle East.

The DOE data released yesterday showed a surprise build in crude of 2.2 million barrels. This build was reported inspite of an increase in refinery runs to 89.6%. 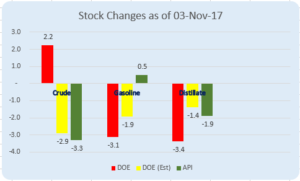 While the products showed healthy draws of 3.1 million barrels and 3.4 million barrels for gasoline and distillates respectively, what appears to have disappointed the markets is the build in crude notwithstanding a rise in refinery runs.  Furthermore, it showed domestic production having grown to 9.62 million barrels per day. This is the highest weekly output on record since January 1983. Also, this is just marginally short of the highest recorded output ever of 9.637 mbpd which was recorded in 1970. And, crude production is expected to climb, the drop in rigs notwithstanding.

This week, we are going to attempt to work out what we call a material balance for the three main components of the report. We would love  to have feedback from you on this section.  Here below is the data for this week.

From the figures above, we can see that there does appear to be a bullish tinge to the headline figures reported for products that cannot be explained from first principles. While we do not have access to all figures, this gives a different perspective on the stock data.

As mentioned above, comments on methodology and / or the data itself are welcome. Please write to sukrit@trifectaconsultants.net

The Naphtha physical crack eased nearly 4% from a 22 month high on Tuesday to $123.08 / MT yesterday. This drop is however regarded as merely circumstantial rather than reflective of slacking of demand.

The paper crack for November however slumped to $ 3.70 /bbl.

Gasoline markets were marginally higher today, possibly as a reaction to the stock draws in the US.

Cash differentials for high sulfur gasoil slipped in the wake of added supply from India weighing on an already oversupplied market.

The regrade for December is valued at $1.60 /bbl. The regrade has settled lower than this in more than 50 of the last 60 months (in the 90th percentile). This would suggest that it is a good level to hedge the regrade for December.  The Q1 regrade too is valued at $ 1.20 a barrel. This level too falls at around the 81st percentile over the last five years. Hence we would recommend hedging it. This looks even more attractive if we consider that the regrade has generally settled negative for most of 2017.

Supply of fuel oil continues to be ample. However, weaker fuel oil prices in the East have narrowed the arbitrage a bit ($ 19.75 /MT yesterday as compared to $ 20.25 /MT on Monday).

The December 180 cst crack is valued at -2.15 /bbl. This level falls in the 85th percentile.  While we have refrained from giving hedging calls on this product for most of the year given the uneasy bullishness that was prevailing, there is a sense that this bullishness is drawing to an end. We would therefore suggest a little bit of hedging at these levels.