As expected, the market did not pay much attention to the DOE data, which showed that stocks were affected less adversely than was originally feared. The WTI-Brent spread is, at – $ 5.40 is the highest we have seen in recent times. While it reflects the relative lack of demand for crude in the US, it also helps make US crudes economical to Asian counterparties, particularly in the wake of higher OSPs for September crude as released by Saudi Aramco.

In other news, Saudi Aramco will cut crude allocations to customers to the extent of 350 kb/d in October. This is lower that the 520 kb/d cuts made in September. This could be due to lower domestic demand for crude in October which would free up supplies for export. Saudi Arabia generally burns 700 kb/d of crude during the summer months. 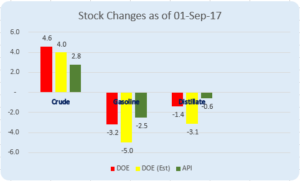 As the chart above shows, these figures should go a great way towards reducing market fears of product shortage. As also crude shortage in the near to mid term.

Refinery run rates were pegged at 79.7%. This is the lowest refinery utilization rate since 2013 and reflects the impact of Harvey on the running of refineries. On the Gulf Cost, refining runs fell to around 6 mbpd, a drop of 35%. This is the lowest level recorded since data started being gathered in 1992.

Crude Oil production dropped to 8.8 million barrels reflecting the shut down of platforms in preparation for Harvey.

Gasoline demand also dropped to 9.2 mbpd. While this number is disappointing both in terms of week on week and year on year,  the market believes that the number is much higher than could have been expected.

Naphtha cracks rose to yet another high as it settled at over $ 97 / ton yesterday. While demand was firm and extremely strong, cash premiums over markers appeared to have been falling lower as compared to the previous two weeks.

The September Naphtha crack is stronger at $ 3.25 /bbl

Gasoline cracks continued to plummet with yesterday’s settle being reported at $ 12.89/bbl. Refiners who hedged this spike in prices (as recommended by us) stand protected against this fall (which is the raison d’etre of risk management).

Yesterday, 18 trades for a volume of 3.1 million barrels were reported in the Platts window. This is the highest volume traded as well as the highest number of trades for this year at least, if not longer. Winson Oil was the purchaser on record for 13 of these 18 cargoes.

The October gasoil crack was traded at $ 15.16 /bbl yesterday, up from $ 15.04 /bbl the day before. The crack has not settled above $ 14 / bbl since November 2015. This is therefore a level at which refiners may like to look at hedging. Having said so, the Gasoil season is just about to come in and any hedging needs to be done slowly and cautiously.

Hectic trading activity was observed in the Fuel Oil trading window as well as market shrugged off a build in Fuel Oil stocks. 380 cst prices were in a backwardation of $ 2 / T

There seems to be something specific happening in the market that is overriding Macroeconomic fundamentals. While Singapore stocks have risen to a more than 5 month high this week, notwithstanding a 50% drop in weekly imports to 720 KT, a four week low. Fuel stocks are 22% higher than levels last year. ARA stocks too are at extremely high levels. 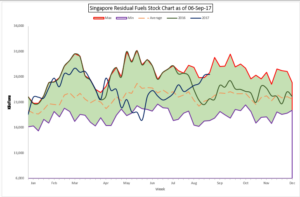 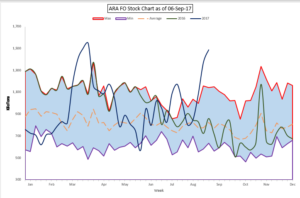