The continued Iranian protests have triggered of a ‘what if’ reaction in an already extremely skittish oil market.

The key issue is “Will the unrest affect oil production / supplies?”  We provide below a precis of an analysis made by Ellen Wald, a columnist at Investing.com

Iran’s oil resources are not near any of the major population centers or sites where the protests are playing out, hence the probability of oil pipeline sabotage is slightly lower. Further, pipeline sabotages are quickly repaired. therefore the impact is likely to be limited.

However, a strike by oil workers could be long and crippling. As of now though, there is no sign of oil workers wanting to strike.

If the Iranian government shuts down the protests it will only make Iran less attractive to foreign investors and Iran will not be able to improve its oil industry. Should that happen, Iranian oil production will remain stagnant and possibly decrease in the long-term.

On the other hand, if the protests do lead to a larger change in Iran’s government, it could be a welcome sign to foreign investors. A change in government could result in oil contracts that offer more favorable terms to foreign companies looking to invest in Iran’s oil industry. This could, in turn, lead to higher oil production in Iran. 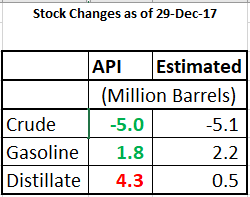 The API reported that crude stocks had dropped by close to 5 million barrels. However, this number seemed to have been expected by the market. While the gasoline build was less than expected, the distillate build was a lot more than expected. This build, especially with reports of colder than normal weather is a bit puzzling.

The market will look to the DOE data for confirmation as usual.

Demand from end users is likely to remain firm as the prices of LPG, the alternative feedstock, remain firm due to heating demand.

Asia’s gasoline crack hit a 15-month low of $6.92 a barrel on Wednesday on ample supplies. This margin could com under more pressure on the back of ample inventories, rising supplies and stagnant demand. Bitter cold weather in parts of the United States could have dampened demand even as the API reported a strong build.

The balance January 92 RON crack has recovered marginally to $ 9.95 /bbl.

Asia’s front-month 500 ppm gasoil crack to Dubai crude rose to a four-session high on Wednesday on the back of firm demand and shrinking supplies. This came as latest data showed middle distillate inventories in the Fujairah oil hub remained low. Middle distillates inventories in the Fujairah Oil Industry Zone (FOIZ) slid 556,000 barrels, from a week ago to a total of 1.326 million barrels in the week ended Jan. 1

The front-month East-West arbitrage spread was at its narrowest since Sept. 15 on Wednesday amid expectations of ample fuel oil flows into Singapore in January and February.  Fujairah Oil Industry Zone (FOIZ) fuel oil inventories fell by 1.661 million barrels (about 248,000 tonnes), from a week ago to 8.626 million barrels (1.287 million tonnes) in the week ended Jan 1. Limited regional fuel oil demand has prompted suppliers to ship several cargoes of the residual fuel from Fujairah primarily to Asia.

The year 2017 was a very strong year for Fuel Oil. The reasons for the strength were attributed to the reduction in supply of Fuel Oil due to the increase in complex refineries and reduced output from South America. 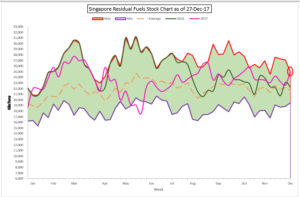 However, for the last 6 months, Fuel stocks in Singapore have been higher than 2016 stocks for the most part and are finishing the year at the highest level ever for the time of the year.

We are also seeing a lot of countries from China to Pakistan driving towards cleaner fuel. Yesterday, Pakistan cancelled a buy tender due to burgeoning domestic supplies.

This would suggest that the Marpol deadline for fuel caps of January 2020 is likely to be implemented without any delay.

This would further seem to suggest that the long strong run has come to an end. We would recommend hedging Q4 2018 and Q1 2019 cracks at current levels of – $ 2.30 /bbl. This is at the 83rd percentile of all settles