A significant build of over 6 million barrels of crude led to an initial dip in prices. However, it was offset by strong demand for gasoline and distillate products and news that OPEC countries maintained heavy supply cuts in January. Crude oil futures ended higher for the fifth straight month bolstered by strong adherence to production cuts, and a very weak US Dollar.

The other data point of interest lies in US crude production. Yesterday’s weekly data pointed to continued growth in US production, not surprisingly, to a new high of 9.92 mb/d. Also released yesterday was EIA’s Petroleum Supply Monthly, whose more authoritative and survey-based data, albeit lagged, are widely used as the benchmark for US production. According to the Monthly data, US production surged higher by 0.38 mb/d during November 2017. The growth puts US oil production just above 10 mb/d, the highest since 1970. Such elevated base of production towards the end of 2017 means any growth in 2018 will have an even bigger impact on the year-over-year balance. 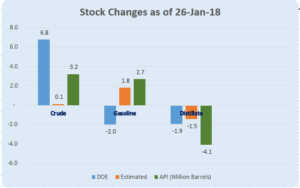 The DOE an increase of 6.8 million barrels in crude stockpiles. Not only was this build considerably higher than market expectations of a build of around 100 kb, it also was far in excess of the figure reported by the API.

Both gasoline and distillates reported a healthy growth in demand of 347 kb/d and 623 kb/d respectively.  The increase in demand, combined with a reduction in run rates to 88.1% (which is normal for this time of the year) may have caused the draw.

Although the the Asian physical naphtha crack (to Brent) rose yesterday to settle at $73.28 /MT, ample supplies are resulting in cargoes being sold at steep discounts. Formosa Petrochemical for instance is learnt to have paid about $ 2 /MT  discount to its own price formula for a first-half March arrival cargo at Mailiao. This is in sharp contrast to a premium of about $ 6 /MT that Formosa had paid last month for a naphtha cargo of the same specification.

The February paper naphtha crack has managed to climb back up into positive territory and is valued at $ 0.25 /bbl today.

The Asian physical gasoline crack (to Brent) slid yesterday to settle at $ 8.52 /bbl.

Although gasoline inventories fell in the U.S., light distillates inventory held in the Fujairah Oil Industry Zone edged up 321,000 bbls to 7.5 million bbls in the week to January 29 making it the highest stock level since April 24 last year.

The February paper 92 Ron gasoline crack has improved over yesterday to $ 12.45 /bbl.

The physical Asian jet fuel market remains supported in the wake of continuing cold weather in Japan as refiners maximize production of kerosene, used for heating in Japan, at the expense of jet fuel.

Akin to gasoline, while distillate stocks fell in the U.S., middle distillates inventory held in the Fujairah Oil Industry Zone rose by 696,000 bbls to 2.6 million bbls in the week to January 29, making it the highest volume since October 16 last year.

The Asian Platts Window on Wednesday saw two trades of 380-cst fuel oil totaling 60,000 MT getting concluded. A total of 1.16 million MT of fuel oil cargoes changed hands in the window in January 2018, down from 1.54 million MT in December 2017.

In the week to January 29, fuel oil inventories at the Fujairah Oil Industry Zone fell for a third straight week by  493,000 bbls to 6.662 million bbls. Fuel oil inventories at Fujairah are now at their lowest levels since recording commenced in January 2017. This drawdown despite Pakistan cancellations of tenders and seasonally low winter demand in the region point to increased flows to Asia.