For the week, Brent gained 0.5%, its third straight week of gains. WTI however dropped 0.4% which is attributable to the change in front month last week.

Over the weekend, French President Emmanuel Macron and Iranian President Hassan Rouhani spoke by telephone on Sunday and agreed to work together in coming weeks to preserve the 2015 Iran nuclear agreement, the Elysee said in a statement. The US has been adamant that the deal be changed failing which it will reimpose sanctions on Iran.

Baker Hughes reported the number of active rigs in the US rose by 5 to 825.

That was the highest number since March 2015, underscoring worries about rising U.S. output. US domestic oil production – driven by shale extraction – rose to an all-time high of 10.59 million barrels per day (bpd) last week, the Energy Information Administration (EIA) said. 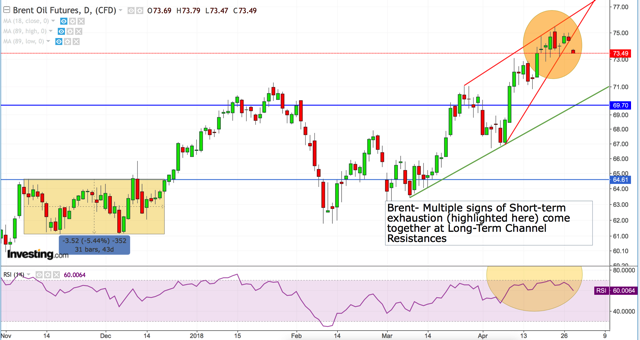 The Range in the week under review is a 75.46/bbl high, and a 73.14 low. The third week with a positive closing, but barely. A week with a smaller range; what the Japanese Candlestick experts call a shooting star- a sign of rest and indecision. We are now looking at the July’18 Contract after a roll-over on Sunday

Last week, we had recommended exiting longs in the 74-76/bbl range, and a stop below 70, incase you want to continue to hold.

We were looking for signs of exhaustion and we found it last week. Narrow trading ranges to indicate ( to risk an overly simplified reading of the market) reluctant follow-through by new buyers and joyous  profit taking by older buyers. Momentum continues to lag this up-swing; another sign of exhaustion.

As mentioned, barring probable retest of the 74-76 range, Brent is likely to head back to the 68-69/bbl range. The Short-term @-week old Demand line breaks on Today’s open. More importantly , this coincides with the Key Long-term Historical Channel Resistance, offering a high probability of a smart reversal.

Asia’s naphtha crack hit a three-week high of $85.20 /MT on Friday following a surge in demand. The front month time spread increased to $ 14.50 / MT reflected the strength in the market amply. This is the highest backwardation since March 31, 2015.

Asia’s gasoline crack was at $6.66 /bbl, highest since Tuesday, but supplies were still ample and fundamentals have been weak since the start of the year.

Asia’s cash premiums for 10 ppm gasoil inched lower on Friday after hitting the highest for the year earlier in the week, while traders remained optimistic on prospects for firmer demand and tightness in supply continuing over the next few weeks.

The impact of seasonal refinery turnarounds on supply would strengthen the robust fundamentals of the industrial fuel, which is aided by the economic growth prospects of the region. At least six of China’s state-owned and private refiners are planning a full annual maintenance shutdown in the second quarter for 30 days or more, including the nation’s largest refiner Sinopec’s Zhenhai unit. .

Asia’s 380-cst fuel oil market extended gains on Friday amid ongoing signs of near-term supply shortages. The Singapore fuel oil market rallied this week as inventories dropped at the same time that some supplies in the region failed to meet the standards for use as shipping fuel, further reducing the amount of supply available.  Cash premiums of the mainstay fuel oil climbed $2.80 a tonne to Singapore quotes, their highest since May 2017 and up from a $1.40 a tonne premium a week ago..