Crude prices plunged on Friday to finish at their lowest levels in weeks, as reports said OPEC and Russia are considering lifting production by as much as 1 million barrels a day as early as June to meet the shortfall in supply from Iran and Venezuela. Brent crude  futures fell $2.36 to settle at $76.46 /bbl. U.S. West Texas Intermediate (WTI) crude futures dropped $2.83 to settle at $67.88 /bbl.

According to OPEC General Secretary, Mohammed Barkindo, US President, Donald Trump’s tweet on the 20th of April (slamming high oil prices) prompted the Saudi Government to rethink oil prices. However, a report appearing in Bloomberg suggests that diplomats and oil officials in Opec countries were also worried about the potential revival in Washington of the so-called “No Oil Producing and Exporting Cartels Act,” which proposes making Opec subject to the Sherman antitrust law, used more than a century ago to break up the oil empire of John Rockefeller.

While Bush, and later Obama refrained from using this ‘NOPEC’ Act against oil prices in the last 10 years, there was a risk that Trump may not go along the same line (possibly because OPEC IS actively squeezing the market this time around). 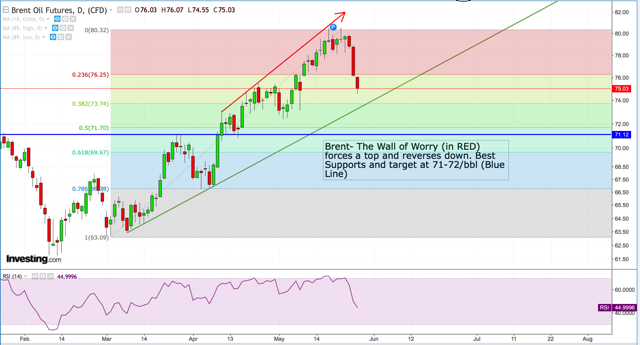 Last week saw the first weekly fall after six gains. This fall was strong ending in an engulfing candle pattern on the weekly charts which is typically bearish. There were more bearish signals too such

Last week we had stayed on the sidelines. For now we see movement in the following manner.

Asia’s naphtha crack stayed firm on tight supplies as reflected in prices being paid for cargoes. Traders said that the buying interest has been so strong that the uptick in gasoline demand has worsened the situation.

Asia’s gasoline crack  was as a 4 session low of $9.59 a barrel. This is however just 5 cents lower than Thursday and over 40% higher than a year ago.

Light distillate stocks in ARA fell by 8% to 998 KT, their lowest since January 4 this year. Stock levels in Asia are still fairly comfortable though they have receded from the record highs seen in March.

Asia’s gasoil markets were steady with little to no change in cash premiums, refining margins or time spreads. Shrinking global inventories remain a cause for concern. While refineries should be coming out of turn around now, the increased demand for the product is also strong.

ARA’s onshore middle distillates stocks  dropped nearly 7 percent to 2.04 million tons in the week to May 24.

Fuel oil cracks were buoyed by dropping crude prices.  The June 380-cst fuel oil crack to Brent crude was trading at a discount of about $11.45 a barrel on Thursday.

It will take a few days for cracks, especially far away cracks to adjust to this sudden drop in crude prices. For now we continue to wait and watch.