Another factor moving prices yesterday was the strong recovery in the US Dollar as trade fear concerns eased out.

Crude prices also spiked briefly on Tuesday after Reuters reported that Saudi Arabia and Russia were working on a longer-term agreement lasting 10 to 20 years, as compared to the current year-to-year agreement. The Saudi crown prince said that the two nations have agreed to work together but are still hashing out the details.

This morning crude futures are trading lower in response to a surprise crude build in API data. At the time of reporting, crude futures are around 30 cents lower than their previous settle after having receded close to $ 1 / barrel lower.

The US DOE has sold 7 million bbl of crude from its SPR to at least 5 different companies. The oil was sold from three of the SPR’s four sites along the USGC. The sale is the latest in nearly 30 planned SPR sales mandated by Congress through fiscal 2027. 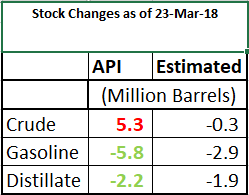 The American Petroleum Institute reported yesterday that Crude Oil stocks in the US had increased by a huge 5.3 million barrels. Given a consensus expectation of a draw of 0.3 million barrels, this came as a rude shock to participants.

However, the API also reported considerable draws in both gasoline and distillates which should help support the market.

All eyes are now on the official data to be released by the DOE later today.

Asia’s naphtha crack rebounded on Tuesday to $82.05 /MT, but gains appear to be capped by high crude oil prices.

April arrivals should remain thin despite an expected rebound in Western arbitrage flows next month, when volumes have been projected to lean on the high side of last year’s monthly average of about 1.28 million tonnes, offset by lower Middle Eastern arrivals that are on course to contract for the first time in three successive months.

Asia’s gasoline crack continued to weaken, dropping 13 cents to $ 7.39/bbl on Tuesday. Demand for oil products may be impacted if crude oil prices remained around their recently elevated levels.

Asia’s cash premium for 10ppm sulphur gasoil cargoes rose on Tuesday amid higher deal values. The cash differential of Asia’s 10ppm gasoil  rose to 35 cents a barrel to Singapore quotes, up from 30 cents on Monday.

Similarly differentials for jet fuel climbed as the market remained optimistic about a strong growth for aviation fuel demand this year.  Cash premiums for jet fuel  increased to 37 cents a barrel to Singapore quotes, compared with 34 cents on Monday.

The regrade, the price spread between jet and gas oil, for April stood at 34 cents a barrel on Tuesday, as compared with 25 cents on Monday.

Asia’s front-month time spread of 380-cst fuel oil flipped into contango during Singapore window trading hours on Tuesday but crept back into narrow backwardation after the Singapore window. Sentiment in Asia’s fuel oil market has been dampened by steady supplies and sluggish demand, the market expected demand to improve in the near term as seasonal summer demand emerges.