Oil prices rallied sharply to end at an eight-week high on Friday, as the prospect of an extension to OPEC-led production cuts into next year helped futures notch their largest weekly advance since July. Brent crude  jumped $ 1.54 to settle at $70.45 / bbl. WTI futures  also gained $ 1.58 to settle at $ 65.88 /bbl.

Oil’s impressive gains defied a slump in global stock markets, which sank in response to worries about a brewing trade war between the U.S. and China. 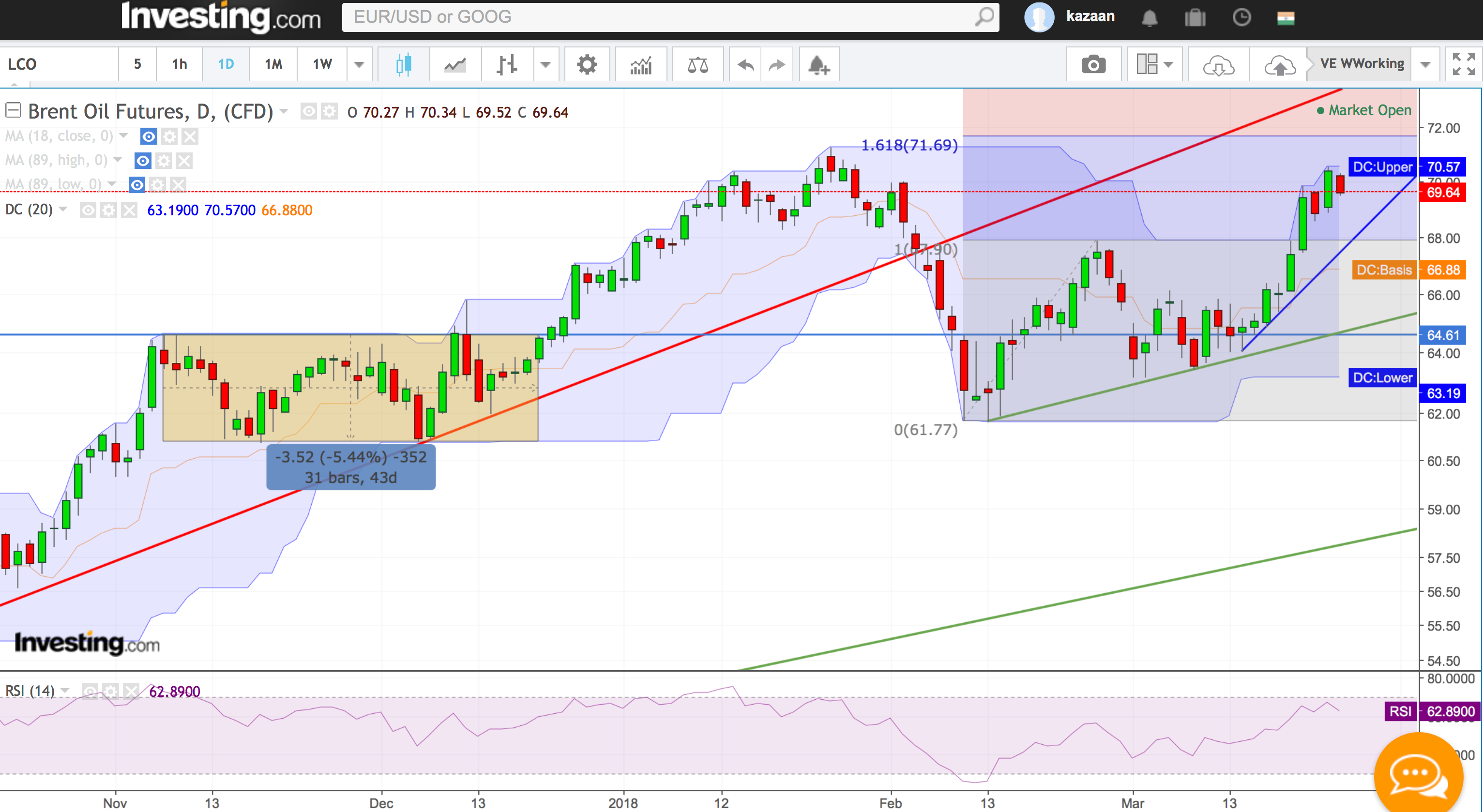 In the week under review, Brent has almost scaled back to the highs of January 2018, making a weekly high at 70.57.

It’s been a very bullish week that

Our last Trade of the week was to be long for targets ~ $68. These targets are met.

While we remain bullish, we expect some sideways action for a few days now that is likely to hold immediate Supports at 68-40/50. Best to buy near these levels with a closing stop below 68.

Immediate resistance is the recent high at $ 71.28 /bbl. Further resistances for now are pegged in the $ 73 area.

Asia’s naphtha crack ended the week at $84.07 /MT, the highest since March 16, supported by squeezed supplies and strong demand. Although Asia has replaced some naphtha with cheaper liquefied petroleum gas (LPG) feedstock, fewer naphtha cargoes available for Asia from the West have created tighter supplies.

Unusual demand from India may also add to the overall supply tightness of naphtha. ONGC Mangalore Petrochemicals Ltd (OMPL) emerged on Thursday to seek a total of 105,000 tonnes of heavy naphtha for its paraxylene plant.

However, this does not appear to have made any impact on the April crack for Naphtha, which is steady at – $ 0.30 /bbl .

Asia’s gasoline crack recovered to $ 7.76/bbl on Friday, its highest level since Monday. Supplies are still seen as plenty.

China exported 870 KT of gasoline in February. This is down from 12.6 percent from January and the lowest since September

Asia’s jet fuel price differentials climbed on Friday amid expectations of tightening supply due to refinery maintenance across the region ahead of an uptick in demand for the summer holiday season. Cash premiums for jet fuel  rose to 36 cents a barrel to Singapore quotes, compared with 34 cents on Thursday. The front-month time spread also widened. Jet fuel prices will get a boost from India, the world’s fastest-growing aviation market, where a lot of airlines are increasing connectivity to include second-tier cities to cash in on some of the busiest routes.

Meanwhile, buying interest pushed up the cash differential of Asia’s 10ppm gasoil  to 28 cents a barrel to Singapore quotes, from 25 cents on Thursday.

Asia’s 380-centistoke (cst) fuel oil cash differential narrowed its discount on Friday, rising from a near two-year low in the previous session, but was lower from last week as suppliers offered cargoes of the fuel at discounted prices. Cash discounts for 380-cst fuel oil rose to minus $1.24 a tonne to Singapore quotes, up from a discount of $1.94 per tonne in the previous session.  By comparison, the week-ago cash differential of 380-cst fuel oil was at a narrow premium of 5 cents a tonne to Singapore quotes

ARA Fuel Oil inventories jumped by 214 KT to 939 KT. Still, ARA fuel oil inventories were 37 percent lower than year-ago levels and slightly below the five-year average of 1.074 million tonnes for this time of the year.